Pastor: God Help Me Kung Fu Them For Y’all!

In a bid to inject a much needed machismo,  gloss and finesse to Christianity and make it more appealing to men, a growing number of Evangelical Churches are involving fight night television viewing parties and sermon series that use ultimate fighting. Other ministers have gone further to hosting or participating in live events.

MEMPHIS — In the back room of a theater on Beale Street, John Renken, 37, a pastor, recently led a group of young men in prayer. “Father, we thank you for tonight,” he said. “We pray that we will be a representation of you.” 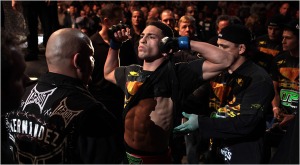 An hour later, a member of his flock who had bowed his head was now unleashing a torrent of blows on an opponent, and Mr. Renken was offering guidance that was not exactly prayerful.

“Hard punches!” he shouted from the sidelines of a martial arts event called Cage Assault. “Finish the fight! To the head! To the head!”

The young man was a member of a fight team at Xtreme Ministries, a small church near Nashville that doubles as a mixed martial arts academy. Mr. Renken, who founded the church and academy, doubles as the team’s coach. The school’s motto is “Where Feet, Fist and Faith Collide.”  – The New York Times

For a brief moment in my minds eye I see Paul the Ultimate All Time Machismo Apostle ( 3 times beaten with rods, once stoned, 3 times shipwrecked; a night and a day adrift at sea; on frequent journeys, in danger from rivers, danger from robbers, danger from my own people, danger from Gentiles, danger in the city, danger in the wilderness, danger at sea, danger from false brothers; in toil and hardship, through many a sleepless night, in hunger and thirst, often without food) – standing in the squared circle. He stands and starts to recite his epistle to the Galatians: “I am astonished that you are so quickly deserting him who called you in the grace of Christ and turning to a different gospel –not that there is another one, but there are some who trouble you and want to distort the gospel of Christ.” I can see that stocky silhouette of Paul’s march across the mart to a bruised and battered new convert as his spits out pieces of his lungs and chipped teeth and wheezes through a broken nose. He then whispers over the deen of spectator noise, “Are you so foolish? Having begun in the spirit, are you now being perfected by the flesh?” Tap out!

2 responses to “Pastor: God Help Me Kung Fu Them For Y’all!”