So Who Are The Reformed Baptists? 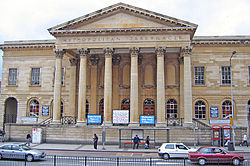 After the time of the apostles, churches continued to multiply everywhere. As the years passed, many churches began to depart from the teachings of the Bible. Superstition and human traditions were propagated as truth. Wars were waged in the name of Christianity. Immorality, idolatry and corruption were rampant in the so-called Christian world. The true Christians were a persecuted minority.

In the 16th century, God brought about a mighty stirring inEurope, causing many people to seek Him and hunger after the truth. This is now called the Reformation. Despite the attempts of the older churches to counter this movement, new churches were founded right through to the 17th century.

InEngland, the Particular Baptist churches arose in the first half of the 17th century. They were known as Baptists because, unlike the other reformed churches, they held to the baptism of believers by immersion. They were known as Particular Baptists because, unlike the General Baptists, they held to the doctrine of ‘particular redemption’, i.e. the belief that Christ died specifically for the elect.

The Particular Baptist churches grew in number quickly inBritainandAmerica, until they were affected by hyper-Calvinism in the 18th century. Hyper-Calvinism distorts the doctrine of the sovereignty of God by denying that it is right to call upon sinners to repent and believe in Christ

From the 19th century, all evangelical churches were weakened by the rise of modernism. The Particular Baptists were not spared. Modernism (or liberalism) deny the supernatural and miraculous of the Bible in the name of proud scholarship. A man-centered emphasis settled upon the churches. The prevailing laxity and low view of the authority of Scripture allowed the charismatic movement to spread fast in the 20th century, with its characteristic practices of tongue-speaking, prophesying, healing, dancing, the use of high-powered music, etc..

A revival of interest in reformed theology began in the 1960s, focused at first inBritainandAmerica. It began to spread worldwide, so that today a reformed movement is found in almost every part of the world. The Baptists and the Presbyterians have benefited most from this recovery. The older Particular Baptist churches have been revived and newer Reformed Baptist churches have been founded, the two streams merging to form a worldwide Reformed Baptist movement.

The beliefs of the Reformed Baptists are summarized in the London Baptist Confession of Faith of 1689. In this document, the major doctrines of the Bible are stated clearly and concisely, yet with sufficient fullness so as to provide a useful reference manual in this age of shallowness and confusion.

How do Reformed Baptists differ from other evangelicals?

There are evangelical churches that show great love for the Lord and have been mightily blessed by Him. Such churches put us to shame and make us yearn to live for the Lord better. Having said that, it remains true that there are evangelicals who are weak in precisely those five areas that the Reformed Baptists are strong. Many evangelicals think that it is enough to have faith in Christ, to pray, and to attempt to win souls for Christ. They also have a defective view of the sovereignty of God and a low view of the authority of Scripture. Quite many have succumbed to charismatic teaching and practice, and also compromised the truth by joining the ecumenical movement.

How do Reformed Baptists differ from other reformed Christians?

There are reformed Christians who hold to infant baptism, believing that the children of believers should be treated as church members and are therefore to be baptized. They baptize by sprinkling instead of immersion. The baptism of infants leads to a mixed church membership: one consisting of believers and non-believers. Reformed Baptists are of the view that only believers should make up the membership of the church.

Some churches claim that they are ‘reformed’ when, in fact, they show no appreciation of the Reformation nor of the truths recovered at that time. Others hold to some of those truths but proceed no further. We do not use the word ‘reformed’ in those ways.

How do Reformed Baptists differ from other Baptists?

Like the other evangelicals, most of the non-reformed Baptists are either fully-fledged Arminians or they hold to a modified Arminianism. Arminianism teaches that Christ died for every individual in the world, and man has free-will which must be exercised to ‘accept Christ’ so as to be saved.

How do the Reformed Baptist Churches relate to other evangelical churches?

We recognize other churches as true churches of Christ when the fundamentals of the faith are upheld by them. The limitations of time, ability and opportunity means that we have to practice selective fellowship with others. Truth determines the degree of closeness that we forge with other churches: the more of truth we agree upon, the closer is our fellowship, and vice versa. Consequently, our closest fellowship is with other Reformed Baptist churches, followed by other reformed churches, and then other evangelical churches.

How do the Reformed Baptist Churches relate to one another?

We have the same beliefs and practices, although there is not a boring uniformity among the churches. Many churches are associated together in a definite way, sharing resources in mutual support, the training of ministers, and church planting. The church members have the opportunity to meet together in annual church camps, conferences, and other combined meetings that are organized regionally from time to time.

What should I do to find out more about the Reformed Baptists?

Attend the weekly meetings of a church nearest you regularly, for a period of time. Talk to the church members and the elders. They will be able to explain to you more…

4 responses to “So Who Are The Reformed Baptists?”