Tesco: Taking Over One Church At a Time. Now We can Worship at The Till.

Looking back through the recent past, Christianity has gone through roller coasters. The reformation brought us out of the darkness of Roman Catholicism and it’s infamous departure from Scripture.  The term Reformation is a historical term that goes back almost four centuries. It refers to a period when the church underwent a “reformation” as men of God attempted to return Christianity to the authority of Scripture. The desire of the Reformation was not to change God’s word but rather to bring the church back to the early Christian church. Led by men like Martin Luther, Ulrich Zwingli and John Calvin, John Knox and the others. The Reformation churches split off from the errors of the medieval Roman church and began what we know today as Protestantism. The Protestant churches were born out of the Reformation.

Today the Protestant churches are not only free from Roman Catholicism but sadly have lost the most important ingredient of healthy Christian survival – the Scriptures. I wonder what Charles Spurgeon would say about his country today after reading the headlines. 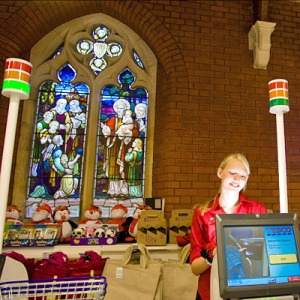 Tesco [the global grocery and general merchandising retailer] is hoping to rake in some extra pennies from heaven – after opening its latest branch in an old church. Biblical characters depicted in ornate stained glass windows now look down on shoppers browsing the aisles in the historic building near Bournemouth. But the conversion of the former Westbourne Methodist Church has divided opinion.

A Tesco spokesman would not reveal whether the firm planned to target the increasing numbers of derelict churches across the UK for new branches.

But he did say the Westbourne store was “proving to be extremely popular with our customers”.

Permission for the shop was granted only after Bournemouth Council agreed to a ‘change of use’ application to allow a retail operation in the building.

One of the dominant figures of the Protestant Reformation was the theologian John Calvin. He did not compromise the Word of God, what scripture taught Calvin believed. Students came from all over the world to listen to his lectures. It is said about two or three years before he died Calvin became very sick. His friends advised him to rest in his labors. However, Calvin replied to them, “Do you want the Lord to find me idle?”

When John Knox went back from Geneva to Scotland, his soul cried out to the Lord, ”O Lord give me Scotland, or I die” The reformation came to Scotland.

Then in the 1800’s Charles Spurgeon said, “The old truths that Calvin preached, that Augustine preached, is the truth that I preach today…John Knox’s gospel is my gospel, and the gospel which thundered through Scotland must thunder through England again.”

Today the protestant Church seems to have played fast and loose. If we do not hold on fast to the old truths of Scripture and get back to the old paths, then we shouldn’t blame TESCO or Walmart or McDonalds for taking over places where we once worshipped our God.

Like Loading...
Christianity church takeovers, Evangelism, modern culture, tesco
← The Hills Are Alive With The Sound of… Just One More Feral Child →

2 responses to “Tesco: Taking Over One Church At a Time. Now We can Worship at The Till.”