Who Was Martin Bucer?

He may have been apparently forgotten as a theological light weight but to the keen eye Martin Bucer’s role in the reformation was and is invaluable. Bucer was an ecclesial diplomat pastor with deep coherent theological conviction. 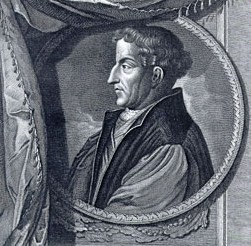 Martin Bucer played a part in the Reformation and his impact was in the city of Strasburg. Martin Bucer is not as well known as Martin Luther and John Calvin but he did make an impact on Strasburg until he was forced to flee the city.

Bucer was born on November 11th 1491. He was influenced by the Humanistic teachings of Erasmus and he read and accepted the arguments of Martin Luther. He had been a Dominican monk but he left in 1521 and became the chaplain to Franz von Sickingen, a protestant knight, and in 1522 became pastor of Landstuhl in the Palatinate. Here he married Elizabeth Silbereisen – a former nun. In 1523, Bucer became a minister in Strasburg where he preached in the cathedral.

Strasburg had long suffered from poor priests in terms of quality and absentee bishops. The city was also a major centre of the book trade so it was very susceptible to the influence of the printed word. The writings of Martin Luther and Melancthon were widely circulated and as early as 1521, preachers had arrived in Strasburg to “preach the pure Gospel”.

The drive for religious reform started in 1525 with Wolfgang Capito and Johann Sturm, the chief magistrate. However, they were very tolerant of Anabaptists who had been driven out of Zwingli’s Zurich. Strasburg faced the danger of being taken over by radicals who would push forward the pace of reform far more quickly than many wanted. In 1527, Bucer put himself at the head of the reforms being carried out in Strasburg and brought a halt to any influence the Anabaptists might have had.

Bucer rejected what the Anabaptists stood for, advanced the idea of predestination, kept the church separate from the state, supported the role of the city’s magistrates in opposition to any form of absolutism, simplified church services and used a system of pastors, elders, doctors and deacons to ‘spread the word’ in the city – a system that was taken up by John Calvin who stayed in Strasburg from 1538 to 1541.

Bucer adopted some of the ideas of Martin Luther and Ulrich Zwingli and he believed that conciliation was the only way that the Protestants could prosper and at all the major conferences between the Protestants and Catholics and between the various Protestant groups, Bucer stood out as a champion of tolerating everybody’s right to disagree but not to such an extent that it caused a split in the Protestant movement. Bucer was a master at phrasing something with great vagueness while maintaining an air of sophistication in his arguments. However, he failed to persuade Luther and Zwingli to accept what each of them thought at Marburg in 1529. In 1536, as a result of the Wittenburg Concord, he started to tentatively gather together Protestant believers in South Germany.

However, his position in Strasburg became difficult after the victory by Charles V at the Battle of Mülberg. This victory threatened Strasburg and Bucer was forced to flee. Archbishop Cranmer offered him a safe haven in England and, as a result, Bucer moved to England where he was appointed Regius Professor of Divinity at Cambridge University in December 1549. Bucer died on February 28th, 1551, and was buried at St. Mary’s. When Mary I became queen of England, she ordered that his body should be exhumed and burned at the stake as a heretic. This was carried out at Market Hill.

One response to “Who Was Martin Bucer?”