“Tebowing” -The new planking for God?

Fads and superstition in sports have always drawn the usual cursory glance. Not any more it seems. There seems to be a growing viral trend intermarrying the two and tugging God at the end of it all. It all started with mundane actions like athletes making or kissing imaginary crosses before the 100 metre dash to heaven-ward finger pointing gestures and gesticulations after scoring goals in football. The other day spectators were taken aback when one soccer player decided to rend the heavens loose by lay hands and praying for his misfiring colleague who hadn’t scored for the team in several months following a big money transfer from a rival team. Well the striker got rewarded with two goals in the game. So, do these fads and trends have some theological magic formula of sorts? Do they pull God closer to one team against the other? Well to add fuel to fire, another one has started (and it’s EPIC!!)… 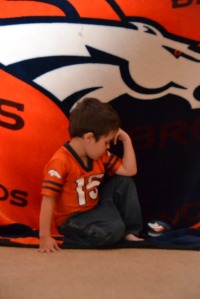 It was only a matter of time before the sports world had its planking equivalent: Tebowing. Tebowing, according to the new Tumblr blog Tebowing.com, is “to get down on a knee and start praying, even if everyone else around you is doing something completely different.” Its namesake is Denver Broncos quarterback Tim Tebow, who inadvertently invented Tebowing. In the last week alone, people have been photographed Tebowing in the U.S. Capitol, Korea and an operating room; near a beer-pong table, the Chrysler Building and a toilet; and mimicking the “Abbey Road” cover. Toddlers have Tebowed. Adrian Beltre accidentally Tebowed. The act of Tebowing has even been carved into a pumpkin.

Seeing that the odd Facebook trend of “planking” (a trend where people take pictures of themselves lying stiffly with arms pressed to their sides in funny precarious position) has been blamed for the death of an Aussie who slipped off a seven-story balcony. The accident occurred as the 20-year-old man was apparently on the ledge trying to balance for a photo of himself lying “like a plank.” So if he was “Tebowing” instead, would God have VERY providentially …uh, rescued him?

Are people so utterly bereft of any kind of sense that anything at all that some jock does is automatically fodder for imitation/ publicity/ mockery?

And the worst part?  The sacred act of prayer is now nothing more than an object of derision.  Thanks Tim.  Maybe you should read the Bible you’re so fond of painting citations of under your eyes and then you’d discover that when you pray you’re to ‘enter into your closet and pray secretly to your father in heaven…’

Prayer isn’t a public spectacle- a show of piety.  It’s communion with God either alone (during private devotions) or in the community of faith (as a public uniting of believer’s hearts and minds).

Like Loading...
Charismania, Christianity, Faith, Modern Church Pragmatism, Satire god and sports, planking, player prays for striker, superstitions and sports, tebowing, tebowing beatles, tebowing farmer, theology of tebowing, viral trends
← And that is what I call a literal translation of baptism. One good reason why hearing the Shepherd’s voice is hard. →

2 responses to ““Tebowing” -The new planking for God?”