The Devil made me do it – honest!

We have all heard that excuse before haven’t we? During one of Phil Johnson’s trips to India (God rest his pen – I still can’t believe he stopped blogging!) met an interesting young man. The story goes that this college student came for advice believing he was suffering an intense Satanic attack and wanted special methods of tactical spiritual warfare to help him rid his home and family of Satanic influences. He said he was finding it impossible to get along with his mother. He said the two of them hardly ever spoke a civil word to one another, and it was destroying the peace of their household. He said he found it hard to study the Bible or grow spiritually as long as these tensions ruled the household. And he had come to the meeting that night, specifically hoping to get Satan out of his household. So… 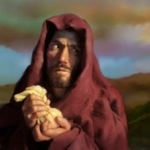 [Phil continues] I first asked him what made him think this problem was uniquely Satanic. As he described it to me, it sounded much more like raw carnal pride on both his part and his mother’s. They were constantly saying unkind and unloving things to one another. He admitted that he purposely did things he knew would annoy her. He spoke disrespectfully to her. He said he just couldn’t stand her and didn’t like being around her.

It sounded like youthful rebellion on his part, more than a satanic attack. So I said, “It sounds to me like you’re just behaving in a fleshly way. I think you need to look into your own heart for the culprit, rather than blaming the devil and outside influences.”

But he insisted that I just didn’t understand the issue. It must be Satanic, he said, because the nature of his conflict with his mother was so powerful—and living with her was like living with the devil.

When I raised my eyebrow at that, he quickly added that he couldn’t help himself; the temptation to speak hatefully to her was so overpowering, it was as if evil forces took over his mind.

I told him first of all, that regardless of Satan’s involvement in his struggle, the root sin causing his problems was fleshly, carnal pride. I also reminded him that when he sinned with his tongue, he was sinning deliberately of his own accord, so he couldn’t escape his own responsibility by blaming Satan for the turmoil in his household.

But I told him I agreed that his trouble was probably also demonic. After all, James 3:6 says, “the tongue is a fire, a world of unrighteousness. The tongue is set among our members, staining the whole body, setting on fire the entire course of life, and set on fire by hell” I also reminded him that according to 1 Samuel 15:23, “Rebellion is as the sin of witchcraft.” By indulging in that kind of rebellion, he was committing a sin as evil and as satanic as witchcraft. He was opening his own heart and life to Satan’s influence, and he was giving Satan every opportunity to take advantage of him. “You need to own those sins and repent of them,” I said.

Then I told him, “I’m going to let you in on a secret. I’m going to give you a foolproof technique for spiritual warfare that is the most powerful and potent defense against Satan you could ever employ. If you do what I say, and follow these instructions every time you are tempted to speak an unkind word to your mother, I guarantee this will solve your problem.”

So he took out his pen and a piece of paper and prepared to take notes. And when he was looking at me expectantly, ready for the answer, I quoted James 4:7: “Resist the devil, and he will flee from you.” And Ephesians 4:26-27: “Let not the sun go down upon your wrath: Neither give place to the devil.”

Furthermore, I said, “If Satan doesn’t flee—if he is successful in luring you into sin—it is always because your own wicked heart agrees with him and cooperates with him, and so you do whatever sinful thing he has tempted you to do. When that happens, instead of blaming it on influences beyond your control, you need to repent, and admit your own fleshly complicity with the devil, and resist him rather than cooperating with him. ‘Be sober, be vigilant; because your adversary the devil, as a roaring lion, walketh about, seeking whom he may devour . . . resist [him, and remain] stedfast in the faith’ (1 Peter 5:8-9).”

I could tell he wasn’t pleased with my reply…..

One response to “The Devil made me do it – honest!”