How could some one so good, do something so vile?

The human heart is utterly deceptive. In one vein we are capable of accomplishing unimaginable feats of bravery and charitable deeds and the next moment descend into utter depravity and wallow in the most hideous and vile acts. 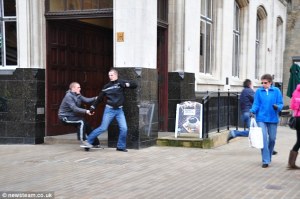 A have-a-go hero who tackled a gun-wielding robber has been jailed for life for a brutal murder.

Deivydas Jacikas, 21, was praised for his bravery after he was caught on camera stopping a fleeing jewel thief last February.

But just eight months later Lithuanian immigrant Jacikas carried out a revenge attack on a grandfather-of-nine Henrikas Baranauskas, 56, who he claimed head-butted his father.

Mr Baranauskas was so badly beaten that his family eventually had to make the agonising decision to switch off his life support machine. END_OF_DOCUMENT_TOKEN_TO_BE_REPLACED