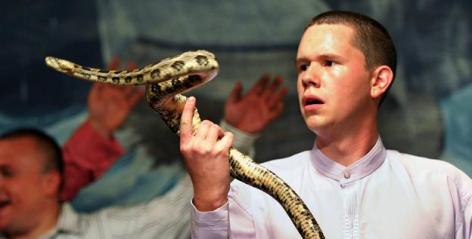 Recently there’s been a drastic decline in the numbers of snake handling pastors. Don’t guess why. The theology has been profoundly hermeneutically dodgy and even savvy pagans are out doing them in their fancy snake charming gimmicks. However in a renewed bid to show off to the rest of the world and to other lesser endowed Christians the snake handling fundamentalists are out again to drum up support and to underline the difference between the “haves” and the “have nots”. You see…

NASHVILLE – Hamblin, 21, pastor of Tabernacle Church of God in LaFollette, Tenn., is part of a new generation of serpent-handling Christians who are revitalizing a century-old faith tradition in Tennessee.

While older serpent handlers were wary of outsiders, these younger believers welcome visitors and use Facebook to promote their often misunderstood — and illegal — version of Christianity. They want to show the beauty and power of their extreme form of spirituality. And they hope eventually to reverse a state ban on handling snakes in church.

Since the early 1900s, a handful of true believers in Eastern Tennessee and other parts of Appalachia have practiced the so-called signs of the gospel, found in a little-known passage in the King James Version of the Gospel of Mark:

“And these signs shall follow them that believe; In my name shall they cast out devils; they shall speak with new tongues; They shall take up serpents; and if they drink any deadly thing, it shall not hurt them; they shall lay hands on the sick, and they shall recover.”

While other churches ignore this passage or treat it metaphorically, serpent handlers follow it literally. Their intense faith demands sinless living and rewards them with spiritual ecstasy — the chance to hold life and death in their hands.

It began with a tingling

Brother Micah Golden felt it first while standing in the parking lot with other worshipers, waiting for church to start during a three-day revival in early May. It began with a tingling in his hands that spread over his body. Then he began to moan and pray. END_OF_DOCUMENT_TOKEN_TO_BE_REPLACED