Leave a comment Posted by The Cidrìe on November 25, 2010 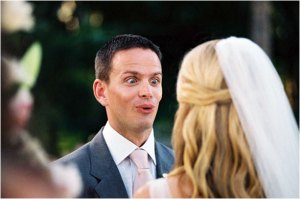 I was rudely awoken this morning by my wife. It being Thanksgiving in America this week I thought we mere mortals in the rest of the world would at least get a wink of sleep and tranquillity as America feasted on stuffed turkey. Not so. Well, my  beautiful wife showed me this headline article that suggests that apparently over one million husbands and wives in England should now head once again up or rather down the aisle to repeat their marriage vows. Yeah, exciting stuff. But why? Was God asleep when they were married and joined in Holy matrimony before Him? No, apparently Church of England vicars have not been choosing their words right for the last thirty years:

Two million husbands and wives are not lawfully married because of a Church of England blunder, it was revealed yesterday. Their church weddings are legally invalid because the vicars who married them used the wrong form of words, Church of England (CofE) lawyers admitted.

The error affects more than a million weddings celebrated over the past 30 years in churches across England. It opens the prospect that marriage partners heading for divorce may try to deny their spouse maintenance, support or even a home on the grounds that they were never really married – the trick tried by Mick Jagger when he claimed his Balinese Hindu wedding to Jerry Hall was never a real marriage.

The Church’s blunder involves the wording of the banns, which must be read out in church three times in the weeks before a wedding. The banns ask if anyone knows of any good reason why the marriage should not be allowed.

Under the Marriage Act of 1949, the wording of the banns must be that set out in 1662 the Book of Common Prayer. This asks the congregation ‘if any of you know cause, or just impediment, why these two persons should not be joined together in Holy Matrimony.’

However, in 1980 the Church brought in a new prayer book, the Alternative Service Book, with a new marriage service and a new form of wording for the banns. The modern wording has continued to be used in the CofE’s latest prayer book, Commons Worship, adopted in 2006.

But when the new prayer books were approved, as is legally necessary, by Parliament, Church lawyers forgot to change the 1949 Marriage Act so that it included the new wording of the banns. This asks if anyone knows a ‘reason in law’ to stop the marriage.

As a result, no wedding conducted under the form prescribed in the newer prayer books is lawful.

These twerps have another thing coming. Don’t they read the Scriptures that what God has joined together no man should put asunder? And that marriage is a sacred covenant between two people before God and not man. Contrary to the beliefs of many in our society, marriage is not some arbitrary idea concocted by mankind and thus able to be structured in any way that we see fit. Rather, it is instituted by God Himself for our benefit and for His glory. It is not some hocus pocus set of incantations derived from an Anglican prayer book.

Just as God enters into covenant with His people, so too does He ordain marriage as a sacred covenant between one man and one woman. Like all other covenants, it is governed by God’s commands for the sake of His glory and this glory is displayed as husband and wife are faithful to God’s design for marriage. Unless the Church of England just wants to create an easy and blissful opportunity for over one million half committed people to legally weasel out of marriage. Nice try!