[pullquote]This is an archive post from 2010. [/pullquote]While it was once the breadbasket of southern Africa, it now produces only one-third of the grain it needs to feed its own population. In Zimbabwe one-third of all children are chronically malnourished, and 10 million people (out of a population of 13 million) live below the poverty line. The fortunes of the country for the last three decades seem to have been tied to the coat tails of once popular and charismatic President Mr Robert Mugabe. But is the tide changing ? 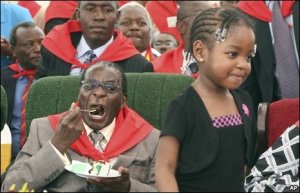 Mugabe has in the past struggled with undisclosed health problems but has always returned to public life looking spritely and healthy. However the past few months Mugabe’s health has deteriorated dramatically with pictures recently being broadcasted showing Mugabe unable to walk without the help of aides in a recent trip to Uganda. Some reports claimed Mugabe fell in full view of other dignitaries.
Mugabe’s condition is reported to be now so volatile that he now no longer sleeps in his marital bedroom instead spending his nights in the same room with his personal physicians who are required to remain awake whilst he sleeps.
The State House has been recently equipped with Israeli state of the art resuscitation equipment.
A few weeks ago [it was] reported that a controversial Nigerian prophet, TB Joshua, who has openly ministered to high ranking officials like Frederick Chiluba and Ghana’s president, John Atta Mills, directed his members to pray for Mugabe.
We can reveal that immediately following the television broadcast by the Synagogue Church of All Nations, in which the faith healer spoke specifically of cancer, Mugabe dispatched aides to request that TB Joshua travel discreetly to meet Mugabe in Zimbabwe.

The request was turned down. TB Joshua, who gains much of his legitimacy by ministering to prominent figures, refused to travel to Zimbabwe stating that he would only see Mugabe on Nigerian soil.- Zim Daily

So who is this new African phenomenon with whom African dignitaries are besotted? The T.B. in T.B. Joshua stands for Temitope Balogun. Though it is said he does not answer questions about his past or himself. He is the founder of a 15,000 member mega church called The Synagogue, Church of All Nations (SCOAN), a Christian organisation headquartered in Lagos, Nigeria.

Despite his ever growing fame and myriads of ensuing signs and wonders there is deep concern regarding T.B Joshua’s theology and practices as they deviate radically from evangelical tenets. Christians must never forget signs and wonders do not authenticate a ministry but rather fidelity to the gospel and biblical doctrine.

Indeed, to many people he seems to appear and come across as a very sincere man living a simple lifestyle. Rather than taking money constantly (as a good many of the celebrated televangelists do) there are stories of T.B. Joshua’s generosity to the poor who struggle to come to him for healing. Nonetheless, one should be very discerning in the evaluation of anything which claims to be “of God”.”
Try the Spirits to see whether they be of God” 1 John 4
A number of other concerns of recently highlighted by Bill Randles are worth looking into:

o On a French television interview, Prophet Joshua said that he had received this ‘gift’ at birth. In God’s word, the true Gifts of the Spirit of God are not bestowed at birth to anyone – see 1 Cor:12-14. One must first be converted to Christ to have God’s Spirit indwelling one – and even then the gifts are distributed “as the Spirit wills”.

o Transubstantiation – On videotape distributed by the Synagogue of all Nations, a “Blood of Jesus ” service was shown. It consisted of the Prophet Joshua blessing a huge tank of water, touching each of twelve running spigots, proclaiming them to now be “the blood of Jesus”. The congregation Were then shown rushing forward, pushing and pulling among themselves, seeking to get to those spigots first, that they might drink, splash, and in some cases even shower in “the blood of Jesus”. This is perhaps the most disturbing aspect of it all as it turns the Biblical doctrine of the blood of Jesus (His vicarious death) into a sensuous, superstitious experience. No Priest or Prophet can turn any substance into the blood of Jesus – that is more akin to paganism and magic than Christianity. The blood of Jesus was shed as a sacrifice to God the Father, not as a potion to be splashed and bathed in!

o False separation between the Sheep and the goats- In addition to the other antics at the blasphemous “Blood of Jesus ” service, as the people pushed, pulled and shoved forward to participate in the so-called blood, those who had “agents of Satan”, were put into a demonic frenzy, rolling on the ground, through the muck and mire (more on that next) screaming and
moaning in agony. There is demon possession indeed, but one would look in vain anywhere in the scriptures to find any deliverance service remotely resembling this so called “Blood of Jesus” service. Joshua proclaimed this as the” separation of the sheep and the goats”, which actually takes place at Judgment Day.

o There is also a degrading and even humiliating aspect to these healings. When Christ healed it was in a dignified manner. True man is below, God is above, but man is not “Nothing”, he is made “In the Image of God”. In the Joshua videotape, released by the Synagogue, men with rectal cancer are asked to take down their pants, before others, both before and after the healing. A woman is made to bare her breasts, one showing cancer, and stands in front of a mixed assembly in the agony of her pain. As the healing progresses, her breast is seen oozing puss onto her dress and flowing down to make a puddle on the floor.

People are seen “Vomiting their troubles away” on the floor. Some vomit blood, others vomit rocks, shells, large worms and live insects. There is no scripture for this. Where did Jesus or His apostles ever do any such things? Yes these stains can be seen on the floor, the very spots where people vomited blood, and where women are seen on camera passing bloody “fibroids” from between their legs! And then on this same floor, people are put into trances, laid out on that same floor, (you can see the spots) and those in trances are seen rolling about in those spots.

Remote control- T.B. Joshua uses a technique called “remote control”. Standing about ten feet away from “patients”, with hand motions he manipulates their motions: By scooting his hands to the left, the patient seems irresistibly drawn to the left; and to the right, the patient goes to the right; by circling his hands, Joshua sends the patient into a circle, often until they spiral out of control, falling into a dazed heap! Once again, this method is more akin to occult healing practices than it is to Biblical healing and in the compassionate manner of Jesus Christ.

Another similar technique is called “point of contact”. For example, the bare-breasted woman suffering in agony from cancer, before the congregation, Joshua stands about 15 feet away, and rubs his chin vigorously, This then evidently affects her cancerous breast, in some way. In contrast, the healing of the woman with the issue of blood in Luke 8:44, simply touched Jesus and was healed!

o Calling Fire from heaven – Joshua has the power to call fire from heaven upon the body parts of sinning members of his congregation! A woman in the video is seen clutching her private parts in agony as Joshua’s fire cleanses her of the sin. This causes mild amusement of others in the audience. It does not bring fear of God! We are told in the book of Revelation that the false prophet calls fire from heaven to the amazement of those under delusion!

o Joshua has strange beliefs. For example, he is a vegetarian : he told an interviewer that many of the people he ministers to in the area of deliverance are “Half fish and half man”. In another interview, he said that “the divine person” within him can appear to thousands simultaneously, even coming to them in their dreams! This is not Biblical or Christian!

I don’t know how much time Mr Mugabe has left in office or what his physical condition is going to be like  in the next decade but I know in desperate times people turn to desperate measures. There’s no such thing as drinking the elixir of life and youth.  Death is an appointment we all must keep sooner or later. And just as each person is destined to die once and after that comes judgment, we all must take time to ask ourselves:

“Where will I go when I am done here?”

When we see those who previously stood firm and secure so quaking with terror,that the fear of death takes hold of them, nay, they are in a manner,swallowed up and annihilated,the inference to be drawn is that men are never duly touched and impressed with a conviction of their insignificance untill they have contrasted themselves with the majesty of God ~John Calvin

5 responses to “Wishful Thinking: Has Mugabe Turned To Christ?”