I Beseech Euodias And Syntyche To Agree In The Lord

When I get to heaven by the grace of the Lord, I want to hunt down two Bible characters and let them know that their names were embedded in Holy writ for having a squabble. I truly wonder what Euodias and Syntyche (nice names, uh?) were in disagreement about (Phil 4:2). What do we do when we run against euodiasian or syntycherous views in church? Here is a little wisodm for life on how to draw a distinction between a debatable or disputable matter… 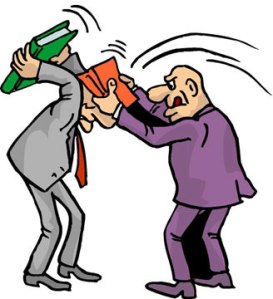 A debatable or disputable matter (Romans 14:1) is an area of behavior, doctrine or tradition on which Christians disagree because a specific biblical absolute does not regulate it. It is therefore a matter of personal preference not divine command. These matters belong to the category of Christian freedom or liberty.

When a behavior, doctrine or tradition is not addressed in Scripture by a specific moral absolute commanding or forbidding an action, it belongs to a category of freedom. In areas of freedom, Christians are encouraged to establish their own convictions but are not permitted to judge or ridicule those who do not share their conviction (Romans 14:3).

Teach this to your Church (Did I say that?)

When local Churches or individual believers do not handle debatable matters properly unnecessary division threatens their fellowship and witness. The challenge regarding debatable matters is addressed most extensively in Romans 14-15. The instruction is offered in relation to two different groups found in most Churches.

Two Groups found in most Churches:

1. The weak in faith- (Romans 14:1;15:1): Those who feel bound to abide by rules and traditions that are not required by God’s absolutes. Faith is used with reference to convictions about what they believed the faith forbids and allows. They are not weak in character but in conscience.

2. The strong in Faith- (Romans 15:1): Those who do not feel bound by rules and traditions outside of God’s absolutes.

Romans 14:1-3: “Accept him whose faith is weak, without passing judgment on disputable matters. One man’s faith allows him to eat everything, but another man, whose faith is weak, eats only vegetables. The man who eats everything must not look down on him who does not, and the man who does not eat everything must not condemn the man who does, for God has accepted him.” Romans 15:1: “We who are strong ought to bear with the failings of the weak and not to please ourselves.”

How to relate in unity with those who do not share your convictions:

Believers are free to establish their own conviction in areas of freedom, but they are clearly not permitted to condemn those who do not share their opinions. If God has not specifically addressed a behavior, custom, activity, or doctrine, we are not allowed to manipulate biblical data to suggest that God has been specific on the matter.

On the other hand, a believer is clearly not permitted to ridicule or look down on other believers who feel constrained in areas of freedom. These are required attitudes that must become matters of accountability in our Churches and fellowship groups. Leaders must instruct the people often about handling debatable matters. [continued here]

Excerpt from What is a Debatable or Disputable Matter? [HT Wisdom for Life]

Like Loading...
Christianity, Doctrine church discipline, debatable and disputable issues in church, disagreements in church, euodias and syntyche, What is a Debatable or Disputable Matter, wisdom of life
← South Sudan Anthem: Oh God We Praise And Glorify You… But Hey You Used to Speak in Tongues, So What Happened? →