Is There A Problem With Cell Groups Again?

The concept of growth groups, connect groups, care groups, life groups, fellowship groups, small groups and home groups seems to have sprung out of good intentions as Christians wanted to know their Bible more and have fellowship in small groups meeting either in homes or some times small itinerant settings. The concept seems to have caught on in many evangelical settings. But is there a problem with this concept so far?

Robert Truelove recently made an interesting observation (with recommendations too) … 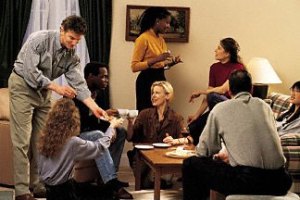 In the typical cell group, no one actually teaches. Rather, one person will moderate a conversation. The environment created is typically one wherein everyone is encouraged to share his or her opinion and all ideas are considered valid. Should another member of the group actually critique another person’s contribution to the discussion, he is seen as being divisive. Rather than promoting Biblical fidelity, the typical cell group is actually promoting relativism.

Where this is the trend in cell groups, I am convinced it were better that they were not even done. The benefits cannot outweigh the damage. However, cell groups meeting in homes can be highly profitable. What is needed is the reformation of the cell group philosophy. With that in mind, here are some thoughts to that end…

1. Cell group leaders need to be teachers. That is, instead of moderating a conversation wherein every idea must be seen as legitimate, they should actually teach sound doctrine. Questions will then replace opinions and the teacher can answer questions from the standpoint of Biblical authority.

2. Churches wishing to have an effective, biblical cell group ministry will have to invest in the training of men to led them. This is hard work, but it must be done. A cell group with a teacher that is unqualified is just as bad or worse than the cell group without a teacher.

We also have to train men in how to teach biblically. We have been victims of the relativistic approach to teaching so long that it is all too easy to slip back into that mode. To simply state a few propositions and then invite the group to have a “discussion” is no advancement in the positive reformation of the cell group.

“…what you have heard from me in the presence of many witnesses entrust to faithful men who will be able to teach others also.” 2 Timothy 2:2

3. Women have no business teaching a co-ed cell group, period! I’m rather short and blunt on this one because the scriptures are.

“I do not permit a woman to teach or to exercise authority over a man…” 1 Timothy 2:12

4 responses to “Is There A Problem With Cell Groups Again?”