I have always asked myself, why do cults flourish and exist? The cults exist and prosper because they purport to fill a spiritual vacuum. Our innate rebellion against God, thrusts upon us an inherent reluctance to accept our spiritual condition and return to God in the way He has prescribed.  You see one of the chief reasons people refuse to accept the gospel is because of the way it ruthlessly illuminates the human condition and commands repentance and faith in the Lord Jesus Christ.

Today I am really concerned about a church that has sponged up thousands of disillusioned young people by advertising itself as “the church for people who don’t do church”. One would indeed fill up an auditorium and become a successful mega church with such a promise. But wait a minute… 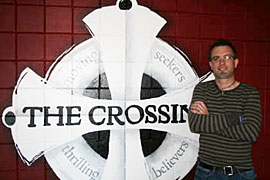 ELK RIVER, Minn. (WCCO) – [Dozens] of families are expected to discuss how they believe a church in the north metro has too much control.

On its website, The Crossing in Elk River states it is “A church for people who don’t do church.”

But, many families said becoming a member comes at too high a cost. Eric Dykstra and his wife Kelly lead The Crossing in Elk River along with three satellite locations. The church is known for its unconventional approach to weekly worship. What started as 40 members six years ago has now grown to more than 2,000.

Katie Kennedy blames the church for taking her son away. She said she started going to the church with her 18-year-old son to support him playing music during the services.

“Down in the pit of my stomach I knew something was terribly wrong in this place. He gave up his life, his parents, his siblings, his music to follow Eric Dykstra,” Kennedy said.

In just a few months, Kennedy’s 18-year-old son quit college, moved out and got married to another church member. Kennedy said it all came at the urging of the lead pastors.

“I didn’t get concerned until I started seeing these changes in my son that weren’t my son,” Kennedy said.

Tracey and Jeremy Rogahn parted ways with The Crossing shortly after they were married in the church. They said they were told they were sinning against God if they didn’t donate a certain amount of money and that volunteers who didn’t agree with Dykstra’s teachings were asked to leave. They also said the Dykstra’s told church members not to talk to them again after leaving the church.

On one hand I would blame all these pleasure seekers for ignoring the warning signs. If a man starts a church and tells you upfront that its not a church then don’t expect him to serve up sound meaty biblical teaching and discipleship. His marketing statement is clear, he wanted people who “don’t do church”. Isn’t it?

But on the other hand such control and pyramid schemes (like the one at Elk river with single human entities) usually lead to more bondage-financial, social and spiritual. They offer alternative but counterfeit prescriptions which go beyond the Scriptures, ignoring, twisting the meaning of, adding to, reinterpreting or flatly contradicting that which is plainly taught in the Bible. Our generation is particularly vulnerable because it is essentially existential, that is, focused on subjective experience rather than on objective truth.

The knowledge of sound doctrine comes through the illumination of the Word of God by the Holy Spirit. This is the means by which we are thoroughly equipped for every good work, and is also the surest defence against the influence of the cults and their controlling benefactors.

My apologies to the thousands of young people who are feeling double crossed at The Crossing church… the cross (and Christ) had nothing to do with it or them.