A Crossless Church; A Christless Gospel

But far be it from me to boast except in the cross of our Lord Jesus Christ.

There was once at time when the deepest urge of a Christian was to be like Christ. To imitate Christ. The coolest thing about Christianity was Christ and for you to know him you must have first stumbled past a bloodied cross. Gone are the days when it was preached that for our sake God made him to be sin who knew no sin, so that in him Jews and Gentiles might become the righteousness of God.

” But in the prophets of Jerusalem I have seen a horrible thing: they commit adultery and walk in lies; they strengthen the hands of evildoers, so that no one turns from his evil; all of them have become like Sodom to me, and its inhabitants like Gomorrah.” Jer 23:14

The Church in the twenty first century indeed is described as “prosperous”. We feel good about ourselves and we write about  how to feel good. We “sow seeds”  into ministries so that God can release a hundred fold “anointing” upon us. Indeed in “blessings” we are “blessed”.  Afterall aren’t pastors driving convertibles in Africa and flying private jets in the Western World.  If I can believe it I can achieve it; if I can speak it I can claim it. Money Cometh and Never Goeth. Be positive, think positive and live positive. How far can we go to the edge and still remain rooted in doctrine. What if in the pursuit of positivity we lost the one thing that kept us relevant…our saltiness. What if God allows the church into a cul de sac because he was unhappy with the hardness of her heart. Could she wander in a Spiritual wilderness?

I am astonished that you are so quickly deserting him who called you in the grace of Christ and are turning to a different gospel— not that there is another one, but there are some who trouble you and want to distort the gospel of Christ. Gal1:6-7

At the heart of Prosperity theology or doctrine is the assertion and belief that God rewards his faithful with health and wealth.  Which does not sound wrong; but could it be that we may be forgetting the essential pillars of our faith and foundation.” But look at the figures”, say the  proponents, ” numbers are doubling and the flocks have never been more numbered on a sunday.”  However we know that deceptively crafting the Christian message to appeal by enticing people with riches and enhancement of life is not scriptural and therefore departs from doctrine. Jesus said simply:

“If anyone would come after me, let him deny himself and take up his cross daily and follow me. (Luke 14:23) So therefore, any one of you who does not renounce all that he has, cannot be my disciple. (Luke 14:33)

When was the last time you heard about self denial or carrying your cross spoken in a discipleship lesson or Bible Study. Self denial is not a virtue that you see preached much. Is it because it isn’t marketable or doesn’t draw ratings in this post-modern culture? It’s a lot easier to broadcast self help and motivational sermons. The relegious best sellers will show you  how to have your best life now. “How to be a better and prosperous you” is more appealing and motivational sermon to preach than “How to die to self”. The Gospel has become a marketable franchise called gospel lite.

And I, when I came to you, brothers I did not come proclaiming to you the testimony of God with lofty speech or wisdom. For I decided to know nothing among you except Jesus Christ and him crucified…that your faith might not rest in the wisdom of men but in the power of God. 1 Cor 2:1-5

What happened to preaching about sin, righteousness and judgement?  Sadly this leaves the Church empty in a state where the true gospel has become irrelevant both to her and the world in which she is. Plunging  more sinners and well meaning weak rootless Christians into a false pursuit of material wealth and false conversions.

And since they did not see fit to acknowledge God, God gave them up to a debased mind to do what ought not to be done. Rom 1:28

A crossless church makes a Christless Christianity. We could be living a delusion.

For the love of money is a root of all kinds of evils. It is through this craving that some have wandered away from the faith and pierced themselves with many pangs. 1Timothy 6:8-9

Paul admonishes the Corinthians by saying,

Examine yourselves, to see whether you are in the faith. Test yourselves. Or do you not realize this about yourselves, that Jesus Christ is in you?–unless indeed you fail to meet the test! (2 Cor 13:5)

These days  it’s the usual circle of teachers and preachers we have amassed for ourselves who are dulling our ears to the far call and drum beat to delve back into the scriptures. No body can hear the voice in the wilderness crying to prepare the way of the Lord and make straight his paths. Do we still yearn for the spiritual things of God?

We wrestle not against flesh and blood. Well, after cautiously barricading ourselves from dangers from the outside never had we thought the biggest dangers would come from within. Jesus already warned us:

He put another parable before them, saying, “The kingdom of heaven may be compared to a man who sowed good seed in his field, but while his men were sleeping, his enemy came and sowed weeds among the wheat and went away.” Matt 13:24-25

Unlike the Bereans in Acts 17 who received the word with eagerness and went back to their homes to search and examine the scriptures we have instead made our selves vulnerable and lain open mouthed to be pampered with every wind of doctrine.

For certain people have crept in unnoticed who long ago were designated for this condemnation, ungodly people, who pervert the grace of our God into sensuality and deny our only Master and Lord, Jesus Christ. Jude 1:4

Finally, The Hartford Institute for Religious Research released a statistical report of megachurches for the 2005 year. Defining a megachurch as “any congregation with a sustained average weekly attendance of 2,000 persons or more in its worship services.” According to this report, there are over 1,200 megachurches in the United States which are broken down by denomination. This is a dramatic increase since 1990 where there were only 350 megachurches and in 2,000 where there were 600 megachurches.

In the same vein, I would like to draw your attention to a damning survey highlighted by Ray Comfort:

A major, denomination of the United States which has 11,500 churches throughout the US – in 1991, their first year of what they called “the decade of harvest,” they got 294,000 decisions for Christ. They found that only 14,000 remained in fellowship. That is, they couldn’t account for 279,000 of their decisions for Jesus. And this is normal modern evangelical statistics when it comes to crusades and local churches. Many converts don’t fall away. They get followed up and squeezed into a local church where they’re surrounded by a good social life, and they stay within the church given assurance they’re saved when there is no grounds for their salvation, because they do not have the things that accompany salvation. – True and False Conversion By Ray Comfort

The spiritual ignorance of the modern day believer is cushioned by social media and mass television programming that never talks about sin, righteousness or judgement. It’s no wonder  Paul writes of such a time as these when people will not endure sound teaching, but having itching ears they will accumulate for themselves teachers to suit their own passions. 2 Tim 4:3,  2Pe 2:1-3, 1Tim 6:8-10, Heb 13:5

There’s hardly any difference between the pursuits of the secular and Christian believers. Materialism is the preoccupation of the spiritually deluded and lost. When self importance and temporary life enhancement preceed self denial and sound doctrinal discipleship then man begins to wonder into pursuit of a seemingly moving target.

Now the Spirit expressly says that in later times some will depart from the faith by devoting themselves to deceitful spirits and teachings of demons 1 Tim 4:1

For many, of whom I have often told you and now tell you even with tears, walk as enemies of the cross of Christ. Their end is destruction, their god is their belly, and they glory in their shame, with minds set on earthly things. Phil 3:18-19

There indeed was once a time when the deepest urge of a Christian was to be like Christ. But like the Laodicean Church we have said I am rich, I have prospered, and I need nothing, not realizing that you are wretched, pitiable, poor, blind, and naked. Jesus beckons, “I counsel you to buy from me gold refined by fire, so that you may be rich, and white garments so that you may clothe yourself and the shame of your nakedness may not be seen, and salve to anoint your eyes, so that you may see.” Rev 3:17-18.

Where is Jesus in all this?

The most gut-wrenching bit about all this is that the Church in Laodicea  seemed to have locked Christ out of “Church” as in the next verse He earnestly pleads and says I stand knocking on the door if any one hears my voice and opens the door I will come and eat with him and he with me.

Remember those who have run the race and fought the fight and have passed on ahead into glory. Remember their parting sermons and songs. They stayed true to the calling; true to the word of God. It’s time to get back to scripture and seek God like never before. We need a sense of urgency that only the Holy Spirit can give. Let us then with confidence draw near to the throne of grace, that we may receive mercy and find grace to help in time of need.

“Son of man, I have made you a watchman for the house of Israel. Whenever you hear a word from my mouth, you shall give them warning from me.” Eze 3:17

“If sinners will be damned, at least let them leap to hell over our bodies. And if they will perish, let them perish with our arms around their knees, imploring them to stay. If hell must be filled, at least let it be filled in the teeth of our exertions, and let not one go there unwarned and unprayed for.” – C.H. Spurgeon

My hope is built on nothing less
Than Jesus’ blood and righteousness;
I dare not trust the sweetest frame, 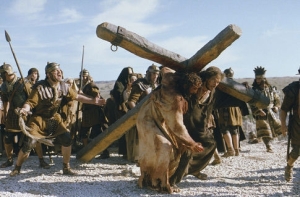 But wholly lean on Jesus’ name.

On Christ, the solid Rock, I stand;

7 responses to “A Crossless Church; A Christless Gospel”