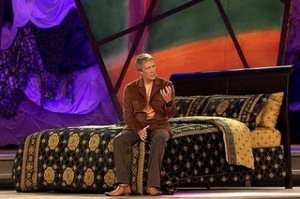 Enough of all this banter against modern Christendom’s latest prodigal and most loved opulent brat. Ed Young Jr. is officially the most google-d and U-tubed Christian celebrity pastor. Gone are the boring days of being an obscure youth pastor left to follow up new converts and pray for toddlers who don’t finish their breakfast cereal in the church back garden. Gone are the days of watching re-runs of Veggie Tales and Tom and Jerry in Sunday school.

The other day he took a bold step in being the honest and transparent man of God that he has become and indulged viewers in a personal tour of his parsonage or is it vicarage. And look how many bloggers treated him as though he had invited Bin Laden to the White House. He had simply allowed a TV Crew to have a glimpse of his humble 10,000 square foot, $1.5 million estate. After all isn’t this a rite of passage for any bona fide celebrity? With the noise that was made you would think these mansions and stuff would not pass away after being eaten by moths and rust. The clever man of God of course is not that foolish to put his trust in the arm of flesh and disregard what the Bible says about storing his treasures down here on earth but he has wisely invested in heaven where no thief or robber can reach.

I do commend him for his honesty and hereby implore the others to follow suit. When did Benny or Creflo or any of the other televangelists ever offer to be so in touch with their master’s flock and offer an open door policy into their living rooms? Don’t people know that as they taunt and turn against this modest and meek man of God there are many millions going to Hell? Why waste his time with your complaints? He has many souls to reach and will not be bothered with your empty threats.

And so what if he has a sleek thumping Falcon 50 private jet? Don’t you like his $ 8 million jet? Do you want him to change it for a Boeing 747? After all when Benny realised people were being stumbled by his puny Merces Benz, he decided to unleash a $65,000 BMW. (To hasten the work of the Lord of course) I must add the Benny in question may or may not be a Benny who may or may not do miracles, signs and wonders for nine different reasons.

Ed, these Christians just don’t know how to live their best life now because they are not from purpose driven churches. They hardly know what the Willow Creek model of church growth is. If they ever had the mustard seed faith of a mega-church pastor they would be rejoicing and thanking God for their pastor rather than making snide comments from behind their Bibles. Good grief! Their lack of faith is causing them to covet what God has given you.

You just be you! Oh yeah.  Speaking of which, just been watching Ed’s latest musical release-U B U or Hakuna Matata for my Swahili brethren. Though it had no Christian lyrical content or scriptural references that doesn’t mean you should judge him or question his allegiances. If the “Holy Hokey Pokey” song didn’t have any Jesus or God in it but healed several back aches and creaky knees why are people questioning the latest Christian craze? What a faithless generation! Do these people know that a man of God can call down fire from heaven like Elijah? Have they read 2 Kings 2:24 where Elisha even called out bears to maul some earthlings who called him, “baldie, baldie”? Well I guess in these days with animal rights activists all around I guess the equivalent of that is mail ordering cuddly teddy bears and fluffy pandas.

The other day when the humble and meek man of God stepped out in his pyjamas and addressed the world in his bed clothes and bathrobe as is his custom to keep his flock abreast with the mind of God, look how many frowned on his video blog. Is it wrong to contextualise and use all means available to feed the flock and keep tabs on the flock? Forget about the raffled bed-head hair and hoarse sleepy voice. Hey, even John the Baptist ate wild honey and addressed congregations dressed in camel hair and a leather belt. Give me a break. Some one muttered, “I won’t be surprised if at this rate he beams his hologram into church soon”. Well you just watch this space. Another self bemused blogger prophesied that with the way things are looking he would not be surprised if Ed Young our beloved pastor started tweeting sermons instead of coming to preach in church. Well I just think I will not dignify that idea with a quotation mark.
Ed Young’s UBU

Ed, you just be you. These Calvinists and Theological retards are just trying to slow you down and box you into a cul-de-sac to believe that many are called and few are chosen. Little do they know the sufficiency of God’s Grace and that He is long suffering and not willing that any should perish. Perchance God will help them realise the errors in their ways and repent and put their trust in Jesus. We all know that Pastor Ed is fighting the good fight. He is taking hold of the eternal life to which he is called, about which he has made a good confession. After all we all love Pastor Ed Young Jr! Don’t we?

14 responses to “I Love Celebrity Pastors Like Ed Young!”