Leave a comment Posted by The Cidrìe on February 22, 2012

Why do people do uncouth gestures even when in their greatest moment of artistic achievement? Well ask 23 year old Grammy  and Brit award winner Adele …

She was right in the middle of giving an emotional acceptance speech about how she was proud to be flying the flag for Britain.

So when she was interrupted so Brit Awards host James Corden could introduce Blur, Adele didn’t take too kindly.

The singer, who had won the top award of the night, Album of the Year, flipped the middle finger to show just how annoyed she was.

It is understandable if you are annoyed but should you be so rude and vulgar in front of your parents, your country men and the whole world? Do you know what Christians some times do when some one cuts them short? Watch this clip.

“For vexation slays the foolish man, and anger kills the simple.” ~Job 5:2

“A quick-tempered man acts foolishly, and a man of evil devices is hated.” ~Prov 14:17 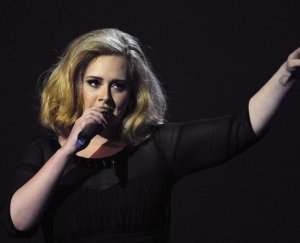