The gospel is secondary. Come for the Easter Helicopter Egg Drop! iPads to be given away too. Interested already?

[This post was first published in April 2012 but the lesson still stands] How I wish we still had Easter services that focus on the death and resurrection of Jesus Christ. Very soon we will have a generation attending church week in and week out that will be the perfect example of a Christless Christianity. It is Easter again and the usual brouhaha is going around… 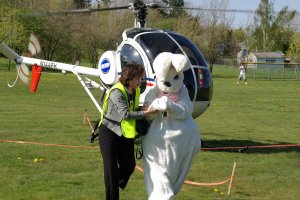 As many churches celebrate Easter with special church services and egg hunts including candy, one North Carolina church will be giving away an Apple iPad, Xbox 360 and two iPod shuffles.

The Shelby campus of Element Church, a recently established congregation of Cleveland County, will be holding a 12,000-egg hunt event at the Keeter stadium of Shelby High School.

Skipper Allen, campus pastor at Element Church, told The Christian Post that the Shelby campus would be doing this along with their other campus in Forest City.

“We have done an egg drop event at our Forest City campus for years now. This year we decided that we would continue doing it in Forest City, and in order to gain more momentum for our Shelby campus we decided to do the exact same service at the same time,” said Allen.

“There will be an invitation given so that people have a chance to respond to the Gospel, and after all of that then we will have the egg hunt portion of the event,” said Allen.

A helicopter will drop thousands of eggs, nearly all of which will be filled with candy save four of them which will have markings that make them redeemable for one of the more technological prizes.

Pastor Titus L. Hopper, executive pastor for Faith Harvest Church of Shelby, told CP that Element’s giveaway idea is good so long as it’s “done with the right motives, is free of manipulation and once the people get there they are showered with the love of Christ.”

“Businesses market their products all the time and use giveaways and other enticing practices to get people into their doors,” said Hopper.

Another bait and switch church.  It is not that I hate eggs or candy. Far be it! I am one sweet toothed earthling but do you really have to deceptively manipulate weaklings like me with bait and switch all the time? Why not just run a community play time called “the yearly bunny and egg hunt” or the “community lottery give away”? Why does it have to have “Easter” tagged on to it? Can’t Easter just be “Easter service” alone?

Like Loading...
Charismania, Christianity christian post, Christianity, Easter, easter egg hunt, give aways, Helicopter
← A lesson from a pastor who has buried 200 members The Irony of Kony and the Hunger Games. →

One response to “The gospel is secondary. Come for the Easter Helicopter Egg Drop! iPads to be given away too. Interested already?”