The “Weslyans who love Calvin” club

Many Calvinists grow up in the rich Reformed tradition, but some of us became Calvinists later in life. We began as naive foaming in the mouth Arminians always on the look out for “those rabid Calvinists who worship Calvin” but as we studied the Bible closely became graciously closet Calvinists till we were able to hold our own ground in the Reformed faith. (Disclaimer: Calvinists do not worship John Calvin). I must therefore emphasise this, before we continue that one’s theological stance must always be based on balanced scriptural and doctrinal integrity rather than popular sentimentality or trending fads. I will now gladly introduce you to a new fledgling club. A couple of Wesleyans seem to appreciate Calvin for his theological views as John Starke (The Gospel Coalition) found out as he interviewed Fred Sanders (Patheos)…. 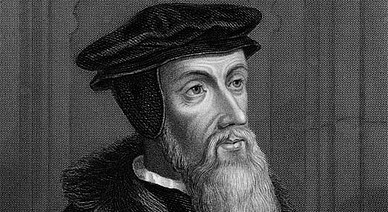 John Starke: Recently you had a fun post, “Calvinists Who Love Wesley.” From what I know of you, I’m tempted to call you a “Wesleyan who loves Calvin.” Is that fair? What about the Calvinist and Reformed tradition do you find compelling? Where is it strongest?

Fred Sanders: Definitely sign me up for the “Wesleyans who love Calvin” club. I teach excerpts from The Institutes every year, and I’ve worked through the whole book cover to cover five times (three with students in seminar). There is no better way to learn the craft of theology than to work through The Institutes. Calvin shows his work: he always lets you know what he’s after, what he’s afraid of, and why he’s doing things. He brings you along with him, and requires an active and responsive reader who is willing to make costly decisions all along the way.
He never just lists a series of truths in the “Ten True Facts About Angels” style; he is always asking, at every point, “What can we be saying the gospel itself while teaching on every subject in theology?” He called The Institutes little, and really believed it: his commentaries of course dwarf it; his Job commentary alone equals its page count. He wrote a systematic theology that succeeds in pushing the readers out to Scripture itself, where they have to deal with the living God, not Calvin. The first time I read The Institutes I was in seminary, and he talked me into infant baptism with his testament-spanning arguments. The third time I read The Institutes I was a new professor, and he talked me out of infant baptism in spite of himself, because of the weakness of his argument. I don’t think I ever leave a Calvin experience unchanged.

Turning from Calvin to the Calvinists, I’d also be willing to host the meetings for a “Wesleyans who love Calvinists” club. I’m going to ignore the left wing of the Reformed tradition here (it’s not just the Wesleyan tradition that has generated its share of liberals), and focus on the side of the tradition that is either evangelical or within hailing distance of conservative evangelicalism.

The Reformed tradition has produced a whole series of great theologians. On my very short list would be Jonathan Edwards, John Owen, Ursinus and Olevianus (that is, the Heidelberg Catechism in particular, but also Ursinus’s exposition of it), and Karl Barth (I said “within hailing distance”). But many more are waiting in the wings; Calvinism has a deep bench.

There are probably a lot of reasons why so many good theologians come from this tradition. But the most important is surely that the Reformed have excelled at getting the central message of Scripture right. They emphasize the glory of God, and trace all of God’s ways back to that ultimate horizon in one way or another. I think that has been a beacon that has drawn a lot of the most faithful and creative theological minds to that tradition. On a related note, I think Ephesians is the key text for the Reformed tradition at large. Not that Ephesians trumps any other book in the canon, but Calvinists have long known that in that letter, Paul stands tip-toe on the highest point of the revelation and insight given to the apostles, and gives a panoramic overview of all God’s ways. I don’t just mean the occurrence of words like election and predestination in chapter 1, I mean the vast sweep of God’s purposes in the recapitulatory economy (1:10), and how it makes known his eternal character as Father, Son, and Spirit. Calvinists from Thomas Goodwin to John Webster get this. If I were to start a theological Ephesians fan club, more Calvinists would show up than anyone else.

Finally, the Reformed tradition keeps producing good leaders who have a seriousness and responsibility about them. I’m not sure how to describe it. It’s as if they’re the grown ups, at least in American Protestantism. They may be tempted to abuse power (and that’s very bad), but at least they are comfortable with the responsible exercise of power, which is not something it’s easy to say about the Wesleyan tradition. Wesleyans are great at shaking things up, at being the powerful protest voice, at activating and empowering the marginalized. But Arminians don’t run things well. I sometimes think the healthiest state of affairs for an interdenominational coalition like evangelicalism would be if the Calvinists ran things and the Wesleyans were a very strong loyal opposition.

Excerpt from You’re a Calvinist, Right?

4 responses to “The “Weslyans who love Calvin” club”