You could be in an Emergent Church if….

Emergent Christianity has infiltrated many church roots. It’s tenaciously spreading and relentlessly challenging all the tenents of the Christian faith. So, how can I spot the hallmarks of Emergent movement? Well I came across this list… 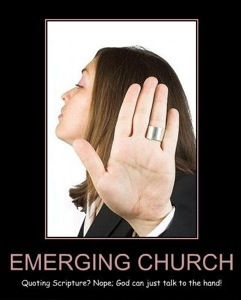 * Are books or videos by teachers such as Brian McLaren, Rob Bell, Doug Pagitt or Tony Jones being recommended or used in classes, home groups or church services? These men began by simply questioning the authority of the Bible and the orthodox nature of Christian doctrine and have now redefined what they call Christianity into a completely cultic, yet loosely defined and identified, religion.

It is a genuine oxymoron that the wildly unorthodox ideas taught by these men could be as readily accepted as they are in supposedly “Evangelical” churches, seminaries and even entire denominations.

* Have biblical doctrines such as salvation by grace, repentance and the reality of a literal Hell been marginalized or abandoned? Is there a constant insistence that the Church must abandon history and orthodox teaching and change our methods in order to be relevant to the postmodern world?

It is a completely flawed concept to believe that postmoderns are somehow different than all generations before them and that if we are to reach them then we must change. Sin in the hearts of men is still the problem and the Cross is still the antidote! God has entrusted us with the ONLY message that can cure the sickness of sin. Who are we to change the message? We must lovingly and accurately deliver the whole Gospel regardless of how it may be accepted and remember that it is the Holy Spirit’s task to draw men to Jesus – not ours. To edit the Gospel – regardless of how well-intentioned – is to thwart the Holy Spirit’s work and merely assures the eternal damnation of those we seek to reach. (Romans 1:16)

* Is Contemplative Prayer/Spirituality being introduced and practiced? Is there talk of “Spiritual Formation,” centering prayer and something called “lectio divina” which, in a nutshell, is leading Evangelicals directly into the mystical and sometimes occult-based practices of the Roman Church? Have you heard the term “labyrinth”? (An usually intricate maze to meditate in, with basis in Greek, Egyptian and Cretan Mythology and used in Tantric Buddhism.) Mystics contend that utilizing a labyrinth will supposedly bring a relaxed mental attitude and end the search for life’s meaning! In reality, this road leads to New Age mysticism and even the occult, as does the popular Emergent practice of Yoga.

* Have the teachings of Open Source, Open Theism or Process Theology been embraced? (Open Theism teaches that God knows the past and lives in the present but has no idea of what the future holds. Obviously, this destroys every prophetic passage in the Bible – including the blessed hope of the Second Coming of Jesus Christ.)

* Is there a new, uncanny identification with saving planet Earth? Has environmentalism become common pulpit rhetoric? (Emergent author, Brian McLaren contends that it is Earth – and not unregenerate humans – that Christ came to save.)

* Perhaps the most important question to ask is about the authority of the Scriptures. In your church, is the Bible held in utmost regard by those in leadership? Is the inerrancy of the Bible preached faithfully? Is there a complete and unapologetic dependence on God’s Word by those in leadership? The growth of liberalism and Emergent ideas is directly proportionate to the value placed on the Scriptures by individuals and church leaders. Without an unwavering accountability to the Word of God, every individual Christian, as well as every local church and national denomination, will soon find themselves in jeopardy.

Excerpt from Stand up for the Truth.

Like Loading...
Christianity, Doctrine, Heresy Doctrine, emerging church movement, Hallmarks of emergent church, signs
← Laughing out loud when reading the Bible… We by nature bend towards that which is false. →

3 responses to “You could be in an Emergent Church if….”