The Four Groups Of Cessationists. 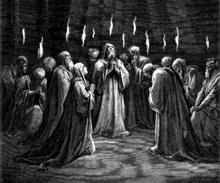 In Christian theology, cessationism is the view that the charismatic gifts of the Holy Spirit, such as tongues, prophecy and healing, ceased being practiced early on in Church history. Cessationists usually believe the miraculous gifts were given only for the foundation of the Church, during the time between the coming of the Holy Spirit on Pentecost, c. AD 33 (see Acts 2) and the fulfillment of God’s purposes in history, usually identified as either the completion of the last book of the New Testament or the death of the last Apostle.Cessationists are divided into four main groups: END_OF_DOCUMENT_TOKEN_TO_BE_REPLACED

To be born again – a Regenerate.

What is conversion to Christ? How does one become born again? To answer these very vital questions here is an excerpt from a book I am currently reading by John Caldwell:

Conversion to Christ is not turning over a new leaf; it is the implanting of new life. This new life is the very life of God, Jesus referred to it as the new birth. Regarding the new birth, RC Sproul says, ‘The term born again is a popular synonym for the theological term regenerate .’ There are two essential things we need to understand about regeneration: the first one is that regeneration is how someone becomes a Christian.
If a person has not experienced regeneration, they are not a Christian. Jesus put it in the following terms while discussing the issue with the Pharisee Nicodemus: “Truly, truly, I say to you, unless one is born again he cannot see the kingdom of God.” (John 3:3) The second essential thing we need to understand about regeneration is that only God can produce the rebirth in a person’s life. END_OF_DOCUMENT_TOKEN_TO_BE_REPLACED

Is the ‘Word of Faith’ movement biblical?

I think this will come in handy for any one trying to find out more on Word of Faith movement. I just met some one who is attending a church where the pastor teaches and believes in the movement. This excerpt and the bible verses can be a good primer:

Word of Faith teaching is decidedly unbiblical. It is not a denomination and does not have a formal organization or hierarchy. Instead, it is a movement that is heavily influenced by a number of high-profile pastors and teachers such as Kenneth Hagin, Benny Hinn, Kenneth Copeland, Paul and Jan Crouch, and Fred Price.

The Word of Faith movement grew out of the Pentecostal movement in the late 20th century. Its founder was E. W. Kenyon, who studied the metaphysical New Thought teachings of Phineas Quimby. Mind science (where “name it and claim it” originated) was combined with Pentecostalism, resulting in a peculiar mix of orthodox Christianity and mysticism. Kenneth Hagin, in turn, studied under E. W. Kenyon and made the Word of Faith movement what it is today. Although individual teachings range from completely heretical to completely ridiculous, what follows is the basic theology most Word of Faith teachers align themselves with.

At the heart of the Word of Faith movement is the belief in the “force of faith.” It is believed words can be used to manipulate the faith-force, and thus actually create what they believe Scripture promises (health and wealth). Laws supposedly governing the faith-force are said to operate independently of God’s sovereign will and that God Himself is subject to these laws. This is nothing short of idolatry, turning our faith—and by extension ourselves—into god. END_OF_DOCUMENT_TOKEN_TO_BE_REPLACED

The importance of doctrine for young believers

“A young ungrounded Christian, when he sees all the fundamental truths, and sees good evidence and reasons of them, perhaps may be yet ignorant of the right order and place of every truth. It is a rare thing to have young professors to understand the necessary truths methodically: and this is a very great defect: for a great part of the usefulness and excellency of particular truths consisteth in the respect they have to one another. This therefore will be a very considerable part of your confirmation, and growth in your understandings, to see the body of the Christian doctrine, as it were, at one view, as the several parts of it are united in one perfect frame; and to know what aspect one point has upon another, and which are their due places. END_OF_DOCUMENT_TOKEN_TO_BE_REPLACED

I’ve heard that before: “Don’t give us Doctrine, we just want to follow Jesus!”

You have heard this countless times haven’t you? “Don’t give me doctrine, I just want to follow Jesus”, what they are really saying is “give me law, not gospel. They are asking for more imperatives and less indicatives. They just want something practical.” But how is this any different than Mormons or theological liberals? Fact is, we need a Savior, not just a moral example. The truth is …

You could not have believed the gospel of Jesus Christ without knowing its contents. You did not just follow a generic Jesus. To be saved you understood that you had no self righteousness of your own and you trusted in Christ’s finished work… which included His living the life you should have lived and dying the death you deserved. This is doctrine. The idea of simply “following Jesus” is requiring more demands of the law because you are looking for Jesus to tell you something you can do. But you need the gospel, not merely law, to be saved or to grow in grace. Indeed following Jesus springs out of a renewed heart. As Christians we only follow Jesus when we know Who we are following and as such we need to preach the gospel to ourselves daily. END_OF_DOCUMENT_TOKEN_TO_BE_REPLACED

You could be in an Emergent Church if….

Emergent Christianity has infiltrated many church roots. It’s tenaciously spreading and relentlessly challenging all the tenents of the Christian faith. So, how can I spot the hallmarks of Emergent movement? Well I came across this list…

* Are books or videos by teachers such as Brian McLaren, Rob Bell, Doug Pagitt or Tony Jones being recommended or used in classes, home groups or church services? These men began by simply questioning the authority of the Bible and the orthodox nature of Christian doctrine and have now redefined what they call Christianity into a completely cultic, yet loosely defined and identified, religion.

It is a genuine oxymoron that the wildly unorthodox ideas taught by these men could be as readily accepted as they are in supposedly “Evangelical” churches, seminaries and even entire denominations.

* Have biblical doctrines such as salvation by grace, repentance and the reality of a literal Hell been marginalized or abandoned? Is there a constant insistence that the Church must abandon history and orthodox teaching and change our methods in order to be relevant to the postmodern world?

It is a completely flawed concept to believe that postmoderns are somehow different than all generations before them and that if we are to reach them then we must change. Sin in the hearts of men is still the problem and the Cross is still the antidote! God has entrusted us with the ONLY message that can cure the sickness of sin. Who are we to change the message? We must lovingly and accurately deliver the whole Gospel regardless of how it may be accepted and remember that it is the Holy Spirit’s task to draw men to Jesus – not ours. To edit the Gospel – regardless of how well-intentioned – is to thwart the Holy Spirit’s work and merely assures the eternal damnation of those we seek to reach. (Romans 1:16)

END_OF_DOCUMENT_TOKEN_TO_BE_REPLACED

[This post was first published in March 2011] God is alive and He is involved in even the minutest of events around us, with this concept in mind meet a good friend of mine called Kathy, a hijab wearing American (not any more though). This is her extra ordinary testimony. A gracious journey to repentance and faith in Christ:

I have long wrestled with the idea of writing my testimony, because I really don’t know what to say. Though from the outside it may appear to others that my life has been an interesting one, it has, in fact, been only a series of really bad choices to bring me to the point where I am now. It is none of my own doing that brought me to the peace I finally find myself in, but rather it is entirely of God. And for that I am eternally thankful.

There is nothing terribly unusual about my childhood. Like many kids my age, I grew up knowing nothing of the idyllic 50’s sitcom families like Leave it to Beaver, Father Knows Best and so on. In fact, by the time I was born it was the 60’s, an era of change. My early childhood was lived, like many kids in the early 70’s marked by divorce, split and blended families, latch-keys and uncertainty. My parents divorced when I was seven years old. My brother and I chose to live in different places, and I went with our mother, while he stayed with our father. My father remarried, and within a couple years, I too was living with him, because my mother’s health prevented my staying with her. She’d had a stroke which left her paralyzed and unable to take care of herself, let alone a child.

END_OF_DOCUMENT_TOKEN_TO_BE_REPLACED

How short should a statement of faith be?

The modern trend is to shift towards short, vague, and essentially ambiguous belief statements which the modern church uses almost as tools of evangelism. To demonstrate this trend, I’ve (borrowed)  Old Truth’s 2006 chart below showing a word count for the statements of faith of some of the most popular churches in America (as in September 2006). For comparison purposes, I’ve also included some old school Christians who have held to the historic belief statements of a better Christianity from times gone by. (Of course I hope this information has changed for the better over the last couple of years)

At the bottom of this chart are the churches with the shortest belief statements, and supposedly – the least emphasis on biblical doctrine. END_OF_DOCUMENT_TOKEN_TO_BE_REPLACED

Are There Lost Books Of The Bible?

There is much talk these days about lost books of the Bible.  From cults to the New Age, people make all sorts of claims about how the Bible is missing books, books that help justify what they hope to believe.  Sometimes people claim that the Bible was edited to take out reincarnation, or the teaching of higher planes of existence, or different gods, or ancestor worship, or “at-one-ment” with nature.

The additional books were not included in the Bible for several reasons: END_OF_DOCUMENT_TOKEN_TO_BE_REPLACED