Golf: A game of thistles and thorns with glimpses of green.

I had my first golf game today. In recent weeks (or has it been months now) there has been loads of rain and rather grim grey wintery weather -not that that is something strange on the queen’s island. Today the weather has been mild in the early teens (11-14 Celsius and 52 F for my American friends) which is almost good and glorious enough to light a barbecue in Scotland (I hear).

Nevertheless here in the Southeastern part of England, I took my whiskers out for my very first game of golf. I do not know how Tiger Woods manages to do his thing but if he had a game as agricultural as mine, he would be recruited by the American mining industry without any questions asked.

Stepping out in the brilliant golden yellow spring morning sunshine with a bag full of clubs and a dozen (soon to be lost golf balls) I submitted my humble soul to the elements and hazards of the 72 par Basildon Golf Course.

No, the golf course is actually relaxing and beautiful. With undulating tree speckled hills and serene water ponds. A pristine play garden in the middle of Essex – atleast before I stepped in it (I know my phone will soon be buzzing with an irate manager asking if I used a hoe or a garden spade to chase after my golf balls…in which case I intend not to answer any phone calls for the next two weeks as I lay low and let the mud settle).

My first ball went out of bounds into the practice range. Ha! I dug it out but went straight into the thistles and thorns on the opposite side! Seven well placed ditches later -or rather divots as well cultured golfers like to call them – I was nudging the ball on the greens and using prayer power to move the rebellious balls into the wobbly ever mocking holes!

I lost afew balls as I scampered along. (Hmm …a few?) By the 13th hole I was wondering if God had allowed the game of golf to be invented to torment wayward souls.

Panting, I finished the 18th hole (par 72) with a big grin on my mud covered face with smudges of (Essex bird doo and feathers) stuck to my glasses. I felt like I had won the Olympics -almost did a Usain Bolt skyward pose only that it must be patented and a reproduction can make you cough a few million dollars for trade mark infringement. Nevertheless I was richer by two golf balls (Srixon and Pinnacle golf balls) as I managed to get a fistful of leaves and somebody else’s lost golf balls under some thickets close to the 17th hole. (Good to know some other wayward players also had rotten games in days past – I have your golf balls if it was you). These war trophies were my guarantees that I would finish the course with a medal. Though honestly I was actually running out of my own balls and there was that gnawing feeling that I would have no ball by the 18th hole if I continued being generous with my swings.

My final score is something I will always be proud of. It may be a course record for a while I think.  I will display my 166 strokes with pride -even sign a few autographs if you want me to.  Now, I have nothing to fear (but hey don’t quote my score beyond this page). My next game will probably be less adventurous but who can say? Who cares?

Golf is a game where mortals embark on that elusive search for an immortal and elusive sprinkle of an elixir -the perfect stroke, the perfect tee shot, the perfect drive.

We only see glimpses of that perfect swing – but the pleasure and excitement lies in it’s humble and persistent pursuit inbetween thistles, thorns and expanses of green pastures. 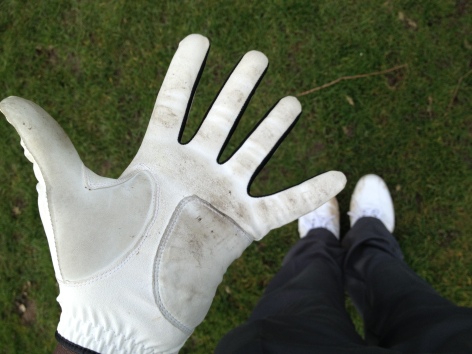 But I had five balls left where did they all go?