Leave a comment Posted by The Cidrìe on November 10, 2022 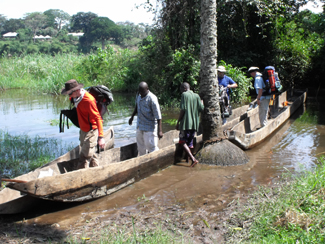 In 1912, medical missionary Dr. William Leslie went to live and minister to tribal people in a remote corner of the Democratic Republic of the Congo. After 17 years he returned to the U.S. a discouraged man – believing he failed to make an impact for Christ. He died nine years after his return.

But in 2010, a team led by Eric Ramsey with Tom Cox World Ministries made a shocking and sensational discovery. They found a network of reproducing churches hidden like glittering diamonds in the dense jungle across the Kwilu River from Vanga, where Dr. Leslie was stationed.

With the help of a Mission Aviation Fellowship pilot, Ramsey and his team flew east from Kinshasa to Vanga, a two and a half hour flight in a Cessna Caravan. After they reached Vanga, they hiked a mile to the Kwilu River and used dugout canoes to cross the half-mile-wide expanse. Then they hiked with backpacks another 10 miles into the jungle before they reached the first village of the Yansi people.

Based on his previous research, Ramsey thought the Yansi in this remote area might have some exposure to the name of Jesus, but no real understanding of who He is. They were unprepared for their remarkable find. END_OF_DOCUMENT_TOKEN_TO_BE_REPLACED