For better or worse…till she hid the TV aerial!

These days you can get a divorce citing anything from well your spouse squeezing the tooth paste tube from the wrong end to hanging the toilet roll the wrong way round. But one woman wont let her husband off easily as she says their union was for life and till death do them part. However… 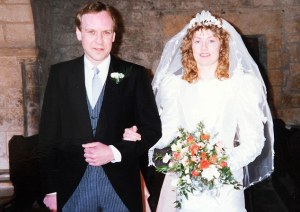 At some point over the next few weeks a letter will arrive at Susan Rae’s home spelling out in cold bureaucratic legal terms the end of her  20-year marriage.

The decree absolute, requested by her university academic husband, is a document she hoped she would never see.

The mother-of-two, from Northampton has spent nearly two years desperately fighting Doug Rae’s attempt to divorce her, insisting their marriage is worth fighting for despite years of rows.

‘I believe that marriage is for life,’ she says.

‘I still love my husband. We have two sons. We are a team. I just want him to come home.

‘The love I have for him is never going to go away.’

This week, the 50-year-old former WPC cut an extraordinary figure at London’s Court of Appeal, where she made a last-ditch effort to stop the man she still loves ending their church union.

There, in front of Lord Justice Thorpe, the couple’s torturous domestic dramas were laid bare, with Susan denying that her ‘unreasonable behaviour’ was to blame for the breakdown of her marriage and arguing that examples given by her husband were nothing more than the ‘minor squabbles’ which take place in any marriage.

She claimed she was perfectly justified in removing the fuse from the family washing machine to prevent her husband from doing the laundry after he regularly ruined her clothes.

Similarly, she argued, there was nothing wrong in throwing away a packet of non-organic ham he had bought to make his sons’ packed lunches.

Meanwhile, Mr Rae, assistant dean at the University of Northampton, said his wife also hid the television aerial to stop him watching his favourite programmes. END_OF_DOCUMENT_TOKEN_TO_BE_REPLACED