Leave a comment Posted by The Cidrìe on October 7, 2010

When Paul spoke to the Ephesian elders in his final meeting with them, he said these words: “Therefore, I testify to you this day that I am innocent of the blood of all men. For I did not shrink from declaring to you the whole purpose of God.” (Acts 20:26-27) The true preacher of the Word seeks to have this as his ambition as well. God is not honored when men think so little of Him and so highly of themselves that they edit the content of the proclamation for the fear of the face of men and so that they may be considered “successful” in some worldly sense. It is a fearful thing to be unfaithful to the task of preaching “the whole counsel of God.” Keeping this in mind, I would like to point out the fact that there are religious hypocrites in the church. There were even in the days of Paul, as he names some by name. But today one looks for the true believer as the oddity in evangelical churches filled with unregenerate men and women who have been fooled into thinking you can shake a man’s hand, say some magical words that are not joined with any kind of repentance or understanding of the gospel itself, and you have your “ticket punched” and you are on your way to heaven.
The result is that any time you would dare to preach the soul-searching passages of Scripture that expose sin and hypocrisy and false faith you will hear the howl of the religious hypocrite from front row to back. Which is why you can observe major “ministries” today that are completely focused upon avoiding any form of offense of the natural man, just so long as they are there on Sunday morning and drop a little something in the plate to help you pay for your massive sports arena.
But even the best church will have false professors in its midst, men and women who, for various reasons, may well play the religion game quite well for an amazingly long time. Some do it for family reasons, some just because they were raised that way, some for acceptance–but in any case, they attend services, may even be involved in ministry, but their hearts are unchanged, their faith in word only. …
So the question I have to ask of many who stand behind pulpits today is this: is your preaching so wimpy it would never trouble a religious hypocrite, and never result in such a person fleeing its proclamation so as to run to man’s religions for refuge? 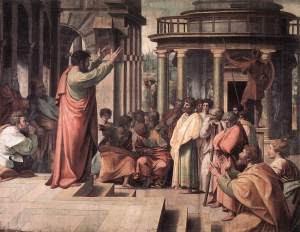 Do you pull back on those elements of God’s truth that are the most offensive to the natural man because you do not wish to see that disdainful look, that annoyed shaking of the head? Do you really distrust the ministry of the Spirit to make the Word of Christ to come alive in the hearts and minds of Christ’s sheep, so that you do not need to worry about those who find offense at His truth? Or have you embraced the spirit of the age which places man’s fragile emotions upon the seat of prominence, and have bought into the idea that to be “loving” means to never give offense to anyone (well, except for God–it is fine to offend Him by thinking yourself so wise you can edit out what shouldn’t be in the gospel in our day)?
Would your teaching and proclamation allow a religious hypocrite to remain safely and comfortably ensconced in the congregation for years on end, never offended, never convicted? Finally, if such a hypocrite does leave and make a show of embracing heresy just to spite you, do you sting with embarrassment, or rejoice that God’s Word continues to work in the hearts of men and women, some to His glory in their salvation, and some to His glory in their damnation? Think about it.

Excerpt from: Is Your Preaching Whimpy? By James White.