When a pastor lightens up on theology, the sufficience of scripture becomes secondary and its not long before he begins to delve into dubious schemes to keep people coming to church. Needless to say, Tennesse must be the one place where its hard to keep a congregation unless your pastor is talking about his “smokin’ hot wife” at a NASCAR race or foraging through an African jungle for exciting beasts: 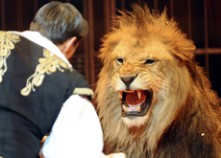 NASHVILLE, Tenn. – One of Nashville’s best known churches has been looking around for a lion and a whole bunch of other African animals. Members of Cornerstone Church in the Madison area won’t be surprised.

“We often use God’s creatures to tell stories,” said Senior Pastor Maury Davis. Sunday services at Cornerstone sometimes look like a circus with Pastor Davis as the ringleader.

From his office on the campus of the mega-church just off I-65, the often unconventional pastor listed all the wild beasts that have served as props in his sermons.

“Giraffes, pigs, parrots, zebras, parrots–even snakes,” smiled Davis. And the lion? “It really was just a thought. I told one of our staffers to look into African animals,” said the pastor.

“We have just really started to explore what we might do,” he added, “which may or may not include a lion.” Davis explained the animal idea compliments Cornerstone’s Family Month which is scheduled for October.

“We will do a service for the appropriate animal. The service we do determines what those animals are,” added Davis.

He said a lion, elephant, maybe even a gorilla may fit the bill. So what would a lion looming in the background of his pulpit bring to a potential sermon? Pastor Davis cited his numerous mission trips to Africa as seeing first hand lessons from God’s creatures.

“What I have learned on the Serengeti is even the King of Beasts has to fight hard to survive,” said Davis.