Prophet Jeremiah Jumps out of Bible and Knocks out Blabbering Man!

Leave a comment Posted by The Cidrìe on September 9, 2011

Well not literally but here’s the interesting story… 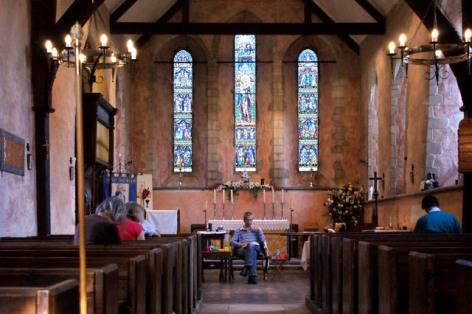 In effort to break the world record for reading aloud, by reading out the entire Bible, failed after the reader lost consciousness while reading Jeremiah.

The reader, David Bathurst, who is 51 and has accomplished several feats for charity, including reciting the Gospels and the complete works of Gilbert and Sullivan from memory, said that he still felt positive about his attempt, which has raised £2,500 for charity.

The current record for reading aloud stands at just over 113 hours, and was set overseas, reports the Church Times.

In order to break this record, Mr Bathurst had to read for five days and nights, and was allowed only 20 minutes of rest after each four hour stint of reading.

Mr Bathurst began the Bible reading in St Mary’s, Barnham, near Chichester, on Wednesday of last week. Problems began during the Thursday night, when he was aware that he was losing consciousness for a few seconds at a time.

“I rallied on Friday, but things really started to unravel on Friday night,” he said. “I kept reading, but I was drifting in and out of consciousness.

“It got to the point where I’d lost the notion of what I was doing, and couldn’t form a link between the words on the page and what I needed to say. The paramedics were eventually called out on Saturday. They said I just needed to sleep. I tried to go on with the reading, but I wasn’t making any sense.”

I some how wish Mr. Bathurst had a zeal to read his bible not as a publicity stunt or for accolades but out of love of theology. Like the Ethiopian eunuch he would stop at a passage and ask, “what does this mean Lord?”

Well, I will hereby pick up where Jeremiah (the weeping prophet) left and lament the lack of zeal for the things of God in our times. Could it just be that my generation has a form of godliness but deny the power thereof? (sob!) 😦