Harold Camping’s Back….and so are the spurious rapture predictions

For lack of any thing to do I some how gave Harold Camping two minutes of my day. Now I need them back. Yup, he is back and worse than ever. This time…. 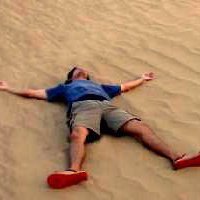 Sold everything and waiting for Harold's rapture...again!

Harold Camping, the Christian broadcaster who boldly announced that the world would end on May 21, only to later say that he was “flabbergasted” when the rapture did not occur, is now telling everyone to get ready for the real rapture, which is set to occur on Oct. 21 – probably.

Some time after being released from a nursing home in June after suffering a stroke, Camping, released an audio message on Family Radio’s website saying, “We would have not been able to be used [by God] to bring about the tremendous event that occurred on May 21 of this year, which probably [will] be finished out on Oct. 21 that’s coming very shortly. That looks like it will be … the final end of everything.”

[Further more] The California Bible teacher, who confessed that he has “restudied” his predictions, said in the recording that the rapture will be quick and quiet. “Probably there will be no pain suffered by anyone because of their rebellion against God,” Camping said.

Well, Harold to begin with I guess the bit that says “no pain” sounds good. More so the bit that says “quietly”. How I wish you could quietly stop these incessant fabricated predictions (and painful extortions) and panderings to people’s emotions so that they can follow you as “God’s only mouth piece”. How many times will you gather people to watch you conjure up calculations to the end of the world as though you have looked into the secret things of God? For how long will you lie that you have peeked under the skirt of the Almighty and seen the forbidden?

Just a few months ago in May 2011  several people sold all their possessions and diverted all their money into the coffers of Family Radio (owned by guess who?) Now guess who is back again with more re-calculations? Haven’t you brought enough shame to the name of Christ already?

Harold please just go away. Just go camping or something!

Like Loading...
Christianity, Heresy end of the world, harold camping
← Pastor Youcef Nadarkhani’s letter from prison to his church members. How Not to Prepare a Sermon. Ever! →

3 responses to “Harold Camping’s Back….and so are the spurious rapture predictions”