Church left with surprise “warm” package on the pulpit by unknown visitors.

It is usually said that if a stone is thrown into a pack of dogs, the one hit by the stone will usually holler. The same seems to be true with the preaching of the gospel – it begins to bring conviction of sin. Some people don’t like this message and it becomes an offence and a stumbling block to them. North Carolinans seem to be chewing on something odd this week: 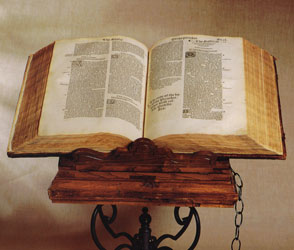 The Cedar Hill AME Zion Church was the worst hit among churches vandalized by unknown persons in North Carolina on Monday night.

MSNBC reports that the State Bureau of Investigation, in collaboration with the Anson County and Stanly County Sheriff’s offices, are investigating Monday night’s cases of vandalism of church and church premises. The Cedar Hill AME Zion Church was in ruins when the pastor arrived in the morning. Some of the spray-painted messages said “God is a lie,” “House of the Devil,” and “666.” The messages also included racial slurs and swastika symbols, suggesting that the vandals might have been neo-Nazis. The vandals tore out the church’s air conditioning units and left water taps running in the building. Before the vandals left, they set a cross on fire at the front lawn of the church. Pastor at the Cedar Hill Church, Reverend Renee Bethea, said: “They tore up our building but they didn’t take our spirit.”

The bible asserts that we are all depraved (actually totally depraved). When we speak of man’s depravity we mean man’s natural condition apart from any grace exerted by God to restrain or transform man. There is no doubt that man could perform more evil acts toward his fellow man than he does.

Through the simple preaching of the gospel, it is  immensely gracious of God that He will choose to change the hearts of some of these vile blasphemous, rebellious and wretched creatures to display His glory. If He could change the Apostle Paul, the self proclaimed “Chief of Sinners”, while on his way to destroy the church in Damascus surely North Carolinans shouldnt despair.

That message from the pulpit could only just be beginning to do its unseen work.

Cheer up and don’t change that tune!

Like Loading...
Christianity, Faith church vandalism, the gospel, Total Depravity
← The cost of taking the gospel out of America Christian in Georgia factory fired for refusing (666) mark of the beast →

One response to “Church left with surprise “warm” package on the pulpit by unknown visitors.”