1 Comment Posted by The Cidrìe on November 22, 2011
Imagine this for a second. I have been a devout Christian for the whole of my life. I am now withered and have no strength in me.  Slumped in my death bed in a rural hospital (somewhere in Boinga Boinga island), the nurse and the wretched doctors stamp the mark of the beast (or better still a Tim Lahaye styled bar code on my forehead). Does that single act of notoriety undo my salvation? Does the creature that the Holy Spirit “regenerated” all of a sudden backslide and become “unregenerate”? Does “the elect” become “reprobate”? Does “the disciple” become “apostate”?  Does my name (in Heaven) suddenly get rubbed out of the Book of life with giant pencil as heaven mourns my inadvertent loss? Well, recently… 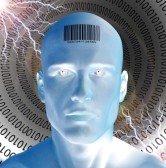 A Georgia factory worker claims in a federal lawsuit that he was fired after he refused to wear a `666′ sticker he feared would doom him to eternal damnation.
Billy E. Hyatt claims he was fired from Pliant Corp., a plastics factory in northern Georgia near Dalton, after he refused to wear a sticker proclaiming that his factory had been accident-free for 666 days. That number is considered the “mark of the beast” in the Bible’s Book of Revelation describing the apocalypse.
Hyatt, who said he’s a devout Christian, had worked for the north Georgia plastics company since June 2007 and like other employees wore stickers each day that proclaimed how long the factory had gone without an accident.
But he grew nervous in early 2009 as the number of accident-free days crept into the 600s. As the company’s safety calendar approached day 666, Hyatt said he approached a manager and explained that wearing it would force him “to accept the mark of the beast and to be condemned to hell.” He said the manager assured him he wouldn’t have to wear the number.
When the day came on March 12, 2009, Hyatt sought a manager to discuss his request. He said he was told that his beliefs were “ridiculous” and that he should wear the sticker or serve a three-day suspension.
Hyatt took the three-day suspension, and was fired at a human resources meeting several days later.

It is sad that this devout Christian lost his job. But I believe there’s a lot to learn from this story. The way one interprets or chooses not to interpret scripture will inadvertently form one’s world view. The same goes to your eschatological stance.
Many of our modern day ideas and eschatological thoughts come from popular movies and mis guided newspaper anec dotes. No wonder when any bleary eyed pandering prophet comes up claiming to know the time and day of the end of the world, he gets prime time television coverage on all Christian and secular stations.
So, what is this “mark of the beast” stuff? Would you get a smiley face sticker with 666 on it to mark 666 days of health and safety at your work place?  Would you use a car number plate with 666? And did Methuselah celebrate his 666th birthday?
He who has wisdom, let him figure that out. 😉
Advertisement