Well some people believe if you can re-write and re -word the Ten Commandments you can make people feel a little more positive about their spiritual and moral state. You see… 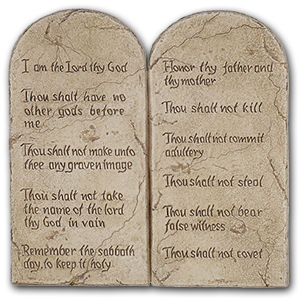 The religious rules, which Christians believe were etched onto tablets by God and given to Moses, have been modified to use up-to-date language and principles. Inspired by last year’s riots, the new vows include “manage your anger”, “know God” and “catch your breath” and are understood to be used in more than 600 churches in Britain.

The original “thou shalt not steal” has become “prosper with a clear conscience”, and the lengthy “thou shalt not take the name of the Lord thy God in vain” becomes “take God seriously”.

The commandments, designed by popular evangelical preacher J John, have been praised by religious leaders for bringing practical advice to modern congregations.

Using short, simple language interspersed with slang, the new rules have now been released on a DVD called “just10 for churches”, aimed at providing guidance.

“Thou shalt not commit adultery” have been edited to “affair-proof your relationships”, and “honour thy father and thy mother” has altered to “keep the peace with your parents”.

J John claims his commandments enable “everyone to understand God’s timeless principles on how we should live” and said he was inspired to write them by last summer’s riots.

He said: “Along with a lot of people I think about the way that we live nowadays and what leads people to do the sort of things that happened in the riots – whether or not we have forgotten something about a good way of living.”

The Reverend Paul Roberts, 54, vicar of St John the Evangelist in Old Coulsdon, Surrey, which dates back to 1210 AD, is among those using the new commandments.

He said: “It’s basically a way of presenting the Ten Commandments to help people connect with them in a positive way.

“Rather than just seeing them as a list of things you shouldn’t do, it is meant to help people live as God intended for our good.

“Unlike the dos and don’ts most people imagine when quizzed about the maker’s instructions, the message is meant to be both a challenge and an encouragement.”

“People now see these commandments not as a set of rules but as a template for living so that we experience God’s best for our lives.

Sigh. How I wish these 600 churches would go back to scripture to understand the importance of the moral law. The Ten Commandments were not ten ambiguous suggestions or ideas for positive living. It’s good to try to teach the Commandments to the youth but taking the sting out of them makes the gospel useless.

The Moral Law was meant to be a mirror to show us our helpless state before a thrice Holy God. For when Adam fell we all fell with him and before God we are not able to fulfill the requirements of God’s Law. And if we break them even at one point, we are guilty of them all. The Ten Commandments remind us that we all desperately in need of a saviour. They are not meant to make us feel good about our selves. No!

Listen to what preachers of yester year said of the Ten Commandments:

Martin Luther:  “The first duty of the gospel preacher is to declare God’s Law and show the nature of sin. Why? Because it will act as a schoolmaster and bring him to everlasting life which is in Jesus Christ”.

John Newton:  “The correct understanding of the harmony between law and grace is to preserve oneself from being entangled by errors on the right hand and on the left”.

John Wesley:  “When speaking of those who didn’t use the Law as a school-master, Wesley said, “All this proceeds from the deepest ignorance of the nature of the properties and use of the Law. And, proves that those who act thus either know not Christ, are strangers to living faith, or are at least but babes in Christ, and as such are unskilled in the word of righteousness.”

Charles Spurgeon:  “Explain the Ten Commandments and obey the divine injunction: show my people their transgressions, and the house of Jacob their sins. Open up the spirituality of the law as our Lord did, and show how it is broken by evil thoughts, intents, and imaginations. By this means many sinners will be pricked in their hearts”.

Spurgeon:  “I do not believe that any man can preach the gospel who does not preach the Law. The Law is the needle, and you cannot draw the silken thread of the gospel through a man’s heart unless you first send the needle of the Law to make way for it. If men do not understand the Law, they will not feel they are sinners. And if they are not consciously sinners, they will never value the sin offering. There is no healing a man till the Law has wounded him, no making him alive till the Law has slain him”.

Water the Commandment down to just “Breathe”? Yup, I think I need to breathe right now.

Like Loading...
Christianity Charles Spurgeon, god, j john, John Wesley, just ten for churches, martin luther, Moses, ten commandments
← Where God by His Grace got me from… Meet The Christians: A Day in the life of a Newly Ordained Pastor →