Barcodes and microchip implants for babies out now? 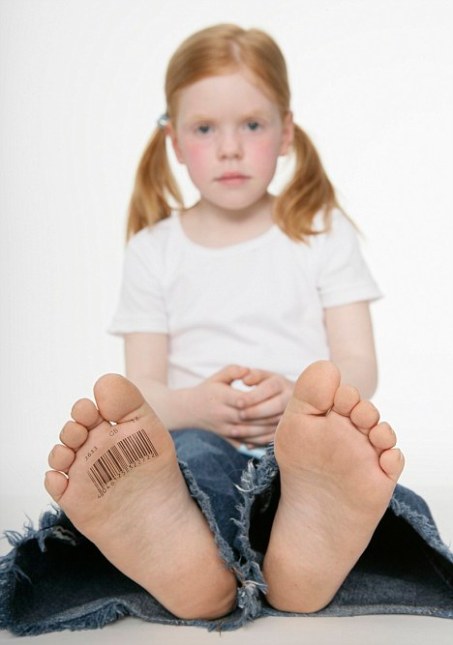 Well I don’t know how this piece of news will be taken. Some will say, “Aha! It’s the mark of the beast being unleashed!” Others will…well let me not speculate. You see The Daily Mail recently published that…

Barcodes and microchips could be found on nearly everything these days, but could humans be next?

American science fiction author Elizabeth Moon raised a few eyebrows last week when she revived the debate about whether it could be beneficial to place barcodes on babies at birth during an interview on a BBC radio program.

‘I would insist on every individual having a unique ID permanently attached — a barcode if you will — an implanted chip to provide an easy, fast inexpensive way to identify individuals,’ she said on a weekly show called The Forum, according to the New York Daily News.

According to Moon, aged 67, the tools that are currently used for the purposes of surveillance and identification, such as video cameras and DNA testing, are too slow and expensive.

Placing a barcode on each person at birth, in her opinion, would solve these problems.

While the technology is already in place, civil liberties advocates have decried past efforts to make ‘barcoding’ a reality, claiming that it would create an Orwellian society devoid of privacy where ‘Big Brother’ is always watching…

In 2002, an implantable ID chip called VeriChip was approved by the U.S. Food and Drug Administration. When scanned, the chip could pull up a 16-digit number containing information about the user.

The program was scrapped in 2010 amid concerns about privacy and safety, but other companies have since come forward, offering similar products.

The biotech company MicroCHIPS has developed an implantable chip to deliver medicine to people on schedule and without injection, while the technology company BIOPTid has patented a non-invasive method of identification called the ‘human barcode.’

Advocates of futuristic identification methods say the barcode could help parents or caregivers keep track of children and the elderly.

Chips, they claim, could be used to easily access medical records, and would make going through security at airports and train stations more convenient to the travellers, who are now forced to stand on lines and go through scanners.

Would you be happy to be tagged, micro chipped and give up a bit of your civil liberty for a safer world? Or is this that “abominable mark of the beast” that will be put on every one’s fore head and right hand by the proverbial anti Christ? Does this fall in the category of issues called “Christian liberties” – issues where the bible is silent and whether you participate or not it is your liberty as an individual and does not invalidate your salvation or faith as a believer? What do you think?

Like Loading...
Christianity Barcode, Bible, Christians, DNA profiling, Elizabeth Moon, mark of the beast, Microchip implant (human), VeriChip
← A day in the life of a missionary in rural Africa. Looking for a good Bible believing church? →

2 responses to “Barcodes and microchip implants for babies out now?”