The dangers and concerns in ‘Four Point Calvinism’ 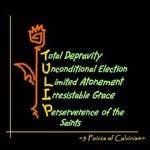 Those whom God elects, He redeems, and those He redeems, He regenerates and sanctifies. All that believers have they owe to the Triune God. The ELECTION of God the Father, the REDEMPTION of God the Son, and the REGENERATING work of God the Spirit, ought never to be separated. They arise from one and the same Will. The Trinity works in harmony to bring about our salvation. So any theology which disconnects unconditional election from particular redemption is not only inconsistent within their own theology, but makes the Trinity out to have a confused, disharmonious will in the purposes of redemption.

So-called four-point Calvinism fails the test of biblical Calvinism because this view tends to see the TULIP as an abstraction rather than seeing it Christocentrically. The TULIP only works when we see Christ at its center. Consider the TULIP as a chiasm with the “L” at the top of the pyramid. It is Jesus Christ which makes sense of all the doctrines of grace. Four-point Calvinists who reject Limited Atonement but embrace irresistible grace must consider this: Irresistible grace is not some abstract doctrine but must be seen in relation to Jesus Christ, specially in relation to the grace purchased by Christ upon the cross. The Spirit of Christ illuminates, regenerates and effectually brings to faith his elect. And this enabling, effectual grace is, from first to last, Christ-centered. It does not come out of a void, nor from some hidden source of grace in God the Father. Therefore Christ must have died for the elect so as to purchase that grace in a way – a redemptive way – that he did not die for the non-elect. That is why we often call it particular redemption. Irresistible grace is one of the redemptive benefits purchased by Jesus Christ … and it was never granted to the non-elect nor intended for them. END_OF_DOCUMENT_TOKEN_TO_BE_REPLACED