Would You Kick (Smart) Mr Thompson Out of Church? 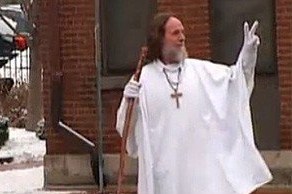 Have you ever asked yourself the question: Is church for believers or non believers? In which case if there are non believers in attendance will you alter your proceedings and message to make them as comfortable as possible? Or will your worship and adoration of your Lord and saviour continue with the reverence and orderliness that goes with congregational worship?

There was a time when church (ekklesia) referred to the body of Christ. And the Lord added to their number those who were being saved. A time when the church was referred to as the bride of Christ. Called to be set apart -for the groom. But in these days of seeker sensitive church models every person feels they have a right to do what ever they want. Or so thought this disgruntled church hopper.

DES PERES, MO — A man dressed as Jesus was kicked out of a St. Louis area church… Police were even called to get in the middle of the spiritual showdown. “We’re called to be ambassadors for Jesus Christ, ambassadors should represent, and that’s what I do. I try to represent my Lord and savior Jesus Christ,” said Neal Thompson Monday night, wearing the same white robe and cross, and carrying the same staff he’s been using every Sunday for 22 years.

He dresses up like Jesus every week, going to a new church every week, he says, to spread his Christian message.

“He said ‘Take up your cross, your breastplate, and your staff and follow in Jesus Christ’s footsteps and wear a white robe to show your sincerity,'” he said. “That’s my job, to spread the word.”

I am aghast. How did smart Mr Thompson know how Jesus would look like? Did he just think growing a  dishevelled beard, donning a starched white flowing robe and sauntering with a staff would grant him a free pass to take over any pulpit? Why doesn’t he try the same goofy antics in a mosque? Just saying. 😉

However my biggest concern is not his quasi-religious garb and elaborate attire as that is just a minor detractor. Mr Thompson holds to a twisted view of scripture. He unfortunately has little or absolutely no understanding of the difference between Law and Gospel. The Jesus he preaches and uses as a fashion model is a figment of his colourful imagination. One who means no more to him than cheap publicity or thirty pieces of silver. This charlatan like many of his ilk appear to be stuck on that page between the Old and the New Testament.

Frankly, that page is usually blank.

Like Loading...
Christianity dressed up as jesus, lutheran church neal thompson, neal thompson, persecution
← Can You Be So…So Anointed And Attain Sinless Perfection? Well You Might Just Be A Calvinist If… →