Watching events across the pond recently made me roll over backwards when an unusual moment occurred: 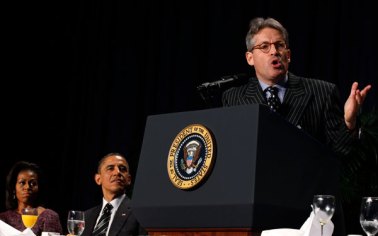 If the organizers of the national prayer breakfast ever want a sitting president to attend their event again, they need to expect that any leader in his right mind is going to ask — no, demand — that he be allowed to see a copy of the keynote address that is traditionally given immediately before the president’s.

That’s how devastating was the speech given by a little known historical biographer named Eric Metaxas, whose clever wit and punchy humor barely disguised a series of heat-seeking missiles that were sent, intentionally or not, in the commander-in-chief’s direction.

Although Obama began his address directly after Metaxas by saying, “I’m not going to be as funny as Eric but I’m grateful that he shared his message with us,” both his tone and speech itself were flat, and he looked as though he wished he could either crawl into a hole or have a different speech in front of him.

In fact, one could be forgiven for thinking that somehow Metaxas had been given an advance copy of Obama’s talk, then tailored his own to rebut the president’s.

Metaxas, a Yale grad and humor writer who once wrote for the children’s series Veggie Tales, began his speech with several jokes and stole the show early on when he noted that George W. Bush, often accused by his critics of being incurious, had read Metaxas’s weighty tome on the German theologian Bonhoeffer; he then proceeded to hand a copy to the president while intoning: “No pressure.”

Obama has been under pressure for some time now to somehow prove his Christian bonafides, for it’s no secret that millions of Americans doubt his Christian faith. A Pew Poll taken in 2010 found that only one third of Americans identified him as a Christian, and even among African-Americans, 46 percent said they were unsure of what religion he practiced.

Obama came to the prayer breakfast with a tidy speech that was clearly designed to lay those doubts to rest. He spoke of his daily habit of prayer and Bible reading, his regular conversations with preachers like T. D. Jakes and Joel Hunter, and even told a story of the time he prayed over Billy Graham.

But before the president could utter a word, it was Metaxas who delivered a devastating, albeit apparently unintentional critique of such God-talk, recounting his own religious upbringing which he described as culturally Christian yet simultaneously full of “phony religiosity.”

“I thought I was a Christian. I guess I was lost,” he matter-of-factly stated.

Standing no more than five feet from Obama whose binder had a speech chock full of quotes from the Good Book, Metaxas said of Jesus:

“When he was tempted in the desert, who was the one throwing Bible verses at him? Satan. That is a perfect picture of dead religion. Using the words of God to do the opposite of what God does. It’s grotesque when you think about it. It’s demonic.”

“Keep in mind that when someone says ‘I am a Christian’ it may mean absolutely nothing,” Metaxas added for good measure, in case anybody missed his point.

The eerie feeling that Metaxas was answering Obama on a speech he had yet to give continued, as he spoke about the uniqueness of Jesus Christ and the Christian religion. Moments after Metaxas finished his speech and sat down, Obama took great pains to describe the other great religions of the world as mirroring his own Christian faith.

“I believe in God’s command to ‘love thy neighbor as thyself,’” Obama noted. “I know the version of that Golden Rule is found in every major religion and every set of beliefs — from Hinduism to Islam to Judaism to the writings of Plato.”

Translation: Christianity is great and so are the other major religions, which essentially teach the same stuff.

“But for me as a Christian, it also coincides with Jesus’s teaching that ‘for unto whom much is given, much shall be required,’” he added. “It mirrors the Islamic belief that those who’ve been blessed have an obligation to use those blessings to help others, or the Jewish doctrine of moderation and consideration for others.”

Metaxas, speaking minutes earlier had a radically different take on the centrality of both his Deity and his faith, and although he never put down other faiths, he methodically recounted the story of what motivated the actions of the abolitionist William Wilberforce, noting:

“The reason Wilberforce fought so hard was because around the time of his 25th birthday he encountered Jesus.” He continued, “The idea to care for the poor or that slavery is wrong — these ideas are not normal human ideas, they are Biblical ideas.”

But Metaxas’s most blistering attack, albeit sheathed carefully in good humor and rapier wit…

“Wilberfoce suddenly took the Bible seriously that all of us are created in the image of God, to care for the least of these.”

After carefully describing the inhumane treatment of both Jews and Africans by those claiming to be Christians, he asked then answered a question:

“You think you’re better than the Germans of that era? You’re not,” adding: “Whom do we say is not fully human today?”

“I would say the same thing about the unborn. Apart from God we cannot see that they are persons. So those of us who know the unborn to be human beings are commanded by God to love those who do not yet see. We need to know that apart from God we would be on the other side of that divide, fighting for what we believe is right.”

By the time he wrapped up his speech with a rendition of Amazing Grace, one got the feeling that this was a modern-day, and perhaps more humorous version, of what Old Testament prophets regularly did to Kings of Israel: deliver brutally honest messages from Yahweh with little regard for their personal safety. Only this time, there were no beheadings, only the difficult-to-watch spectacle of seeing a president forced to uncomfortably read a speech which had just been shredded to pieces by a man who couldn’t possibly have known what was coming. And as he did so, the audience in that room likely left with Metaxas’s four-word condemnation, intentional or not, of the 44th president of the United States ringing in their ears:

“God is not fooled.”