Tag Archives: lectures to my students 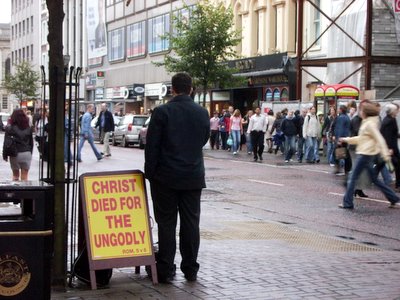 A remarkable sinner who became a remarkable convert, was an extraordinarily gifted man and fearless street preacher in the Edinburgh of the mid-1800’s. It is said Robert Flockhart (1778-1857) had sinned much, but he had been forgiven much, and so he loved much. Where Robert in Satan’s service had often exposed himself to disgrace, danger, and death itself, but after his conversion, “… If there had been need for it, I believe there was no man in Edinburgh who would have gone to the stake or scaffold for Jesus Christ with a firmer step or nobler bearing than this brave old soldier of the cross.”

Flockhart was converted in India, while a soldier, he became a fearless as a street preacher – often in the face of unruly crowds. In a tribute to Robert Flockhart, Charles Spurgeon said:

I must linger a moment over Robert Flockhart, of Edinburgh, who, though a lesser light, was a constant one, and a fit example to the bulk of Christ’s street witnesses. Every evening, in all weathers and amid many persecutions, did this brave man continue to speak in the street for forty-three years. Think of that, and never be discouraged. When he was tottering to the grave the old soldier was still at his post. “Compassion to the souls of men drove me,” said he, “to the streets and lanes of my native city, to plead with sinners and persuade them to come to Jesus. The love of Christ constrained me.”

Neither the hostility of the police, nor the insults of Papists, Unitarians, and the like could move him; he rebuked error in the plainest terms, and preached salvation by grace with all his might. So lately has he passed away that Edinburgh remembers him still. There is room for such in all our cities and towns, and need for hundreds of his noble order in this huge nation of London—can I call it less?

Lectures to my Students, Charles Spurgeon.