Has A Kundalini Spirit Infiltrated Christianity? 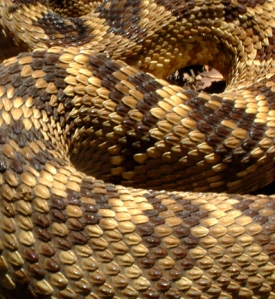 I have been looking at the possibility that a Kundalini spirit, possibly the main or head spirit, has masked itself as Christian and infiltrated many charismatic circles and (was) in full operation down in Florida and has worked in past in Toronto and Brownsville. Here is a compilation of some of my findings – I think the similarities are more than coincidence – what do you think?

Serpent Power of the Awakening Kundalini:

In Hinduism there are several forms of yoga (yoking) which all have the goal of giving the practitioner cosmic consciousness and unity with God. [The origins of Kundalini Yoga (sometimes called Raja or roya Yoga) come from the form of Hinduism known as Kashmir Shavism. This form of yoga comes from the Kashmir region of India and the god these Hindus worship is Shiva. Shiva was the Hindu god represented in the movie “Indiana Jones and the Temple of Doom.”

Hindu depiction Of A Chakra:

Sanskrit kund, “to burn”; kunda, “to coil or to spiral”: a concentrated field of intelligent, cosmic invisible energy absolutely vital to life; beginning in the base of the spine as a man or woman begins to evolve in their first incarnation; fed by the chakras along the spine and by the cosmic energy entering through the feet from the earth; as wisdom is earned in each incarnation, this electromagnetic, ultrapotent energy moves slowly upward through the spine; Kundalini is feminine polarity in nature. Sim. (Donning International Encyclopedic Psychic Dictionary, June G. Beltzer, Ph.D., p. 343).

1.  Kundalini in English means “the serpent power.” It is the common Hindu belief that within each person resides a “serpent” coiled tightly up at the base of the spine. Through practicing Kundalini yoga, along with chanting, mediation, and an impartation from the guru one can have their Kundalini Awakened. Kundalini Yoga is the “power yoga” of Hinduism. It is the pathway to supernatural power and godhood. Kundalini Yoga can also lead to mental collapse, psychosis, and demon possession or oppression.

2.  “Asian cultures have used these teachings of the Chakra System for about 4,000 years and it’s only the last approx. 10 years that this information has filtered into the west. Chakra literally translated from the Hindi means ‘Wheel of spinning Energy’. Within our bodies are contained seven major energy centres. They are located within the body in front of the spinal column and are aligned vertically up and down the spine. Each wheel has a colour of the rainbow and vibrates to a musical note… .” (Inner Star Magazine)

3.  Kundalini is at least 1000 years old occult practice. It involves bodily manifestations as a consequence for the “awakening of an individual’s Kundalini” and is related to, for example, Qigong (a Chinese occultic tradition).

4. Kundalini energy is typically described as a powerful energy source lying dormant in the form of a coiled serpent at the base of the human spine. When freed it reputedly has the capacity to effect great physical healings. Christina and Stanislov Grof, New Age authors of the book “The Stormy Search for the Self,” describe how the awakening of Kundalini energy can be triggered by an advanced spiritual teacher or guru. And how the awakening can bring up memories of past psychological traumas. The Grofs state that “individuals involved in this process might find it difficult to control their behavior; during power rushes of Kundalini energy, they often emit various involuntary sounds, and their bodies move in strange and unexpected patterns. Among the most common manifestations … are unmotivated and unnatural laughter or crying, talking tongues … and imitating a variety of animal sounds and movements” (p. 78-79). The Grofs state that “careful study of the manifestations of Kundalini awakening confirm that this process, although sometimes very intense and shattering, is essentially healing” (citing Warren Smith by permission in an article for Spiritual Counterfeits Project entitled “HOLY LAUGHTER or Strong Delusion” (Fall, 1994, Vol. 19.2), p. 14).

Some Kundalini Examples compared to the Lakeland Flordia Healing Revival

Sri Ramakrishna, [1836-1886] represents the very core of the spiritual realizations of the seers and sages of India. “He daily went into ’samahdi,’ a trance in which one involuntarily falls down unconscious and enters a rapturous state of super-conscious bliss (ananda), complete with beautiful visions and often involving astral projection. These states could last anywhere from a few minutes to several days and were often accompanied by uncontrollable laughter or weeping. He could send others into this state with a single touch to the head or chest” (unpublished article by John Rice on file at SPIRITUAL COUNTERFEITS PROJECT), (citing Warren Smith by permission in an article for Spiritual Counterfeits Project entitled “HOLY LAUGHTER or Strong Delusion”, Fall, 1994, Vol. 19.2)

4. He could send others into this state with a single touch to the head or chest” – SAME AS FLORIDA HEALING REVIVAL.

Christians that have flocked in their thousands to Toronto, Brownsville and Lakeland, do not seem to realize that the manifestations at these places are not a “New Move of God,” but in fact, as highlighted in the ‘Kundalini Spirit’ article, have existed for hundreds of years.

Todd Bentley, John Arnott, Rick Joyner and Rodney Howard Browne et al, think they are running with the “New Fire” whilst running across stage, into the crowd, yelling “Bam” and “Fire,”

Test the Spirits — Test all Things

1 Thessalonians 5:21 instructs us to “test [prove] all things”

Read the rest of the article here.

12 responses to “Has A Kundalini Spirit Infiltrated Christianity?”